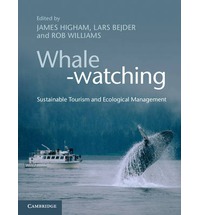 Whale and dolphin-watching may not be the low-impact, sustainable industries many believe them to be, according to a new evidence-based book containing contributions from some 50 international experts.

Whale-watching: Sustainable Tourism and Ecological Management critically explores the complex issues associated with the sustainable management of whale watching, highlighting the spectacular growth in demand for tourist interactions with cetaceans in the wild, and the challenge of effective policy, planning and management.

Professor Higham explains “the book centres on one key point of debate. Whale watching has developed very quickly around the world and has been strongly advocated by non-governmental organisations, governments and tourism development agencies, which highlight the assumed sustainability of ‘non-consumptive' enterprises. This book really puts the spotlight on that.

“The rationale is very appealing. If you don't hunt and kill whales or dolphins, but shoot them with cameras rather than harpoons, then it may intuitively be considered non-consumptive.

"But as the industry has grown, animal populations have come under more and more pressure and the ‘non-consumptive' nature of whale watching has been drawn into question.

Associate Professor Bejder's own research in Shark Bay, Western Australia, a popular site for people to view bottlenose dolphins, demonstrates that as the level of interaction increases, so too does the effect on the animals' biology, habitat use and numbers.

He explains “Whales and dolphins frequent certain ecological regions because they are good places to feed, or rest, or raise young.

“Take the spinner dolphins of Hawai'i. They feed at night in offshore waters and go into shallow, protected bays to rest and socialise during the day – but that's where and when tourists gather to watch them, potentially disturbing their critical daily resting period.”

Professor Higham adds “the book highlights that, in considering the relationships that exist between humans and cetaceans, terms such as ‘exploitative' and ‘consumptive' must be used advisedly.

“The transition from physical extraction (hunting) to the selling of ‘services' (tourist experiences) should acknowledge that both may be exploitative and consumptive in different ways and to varying degrees.”

All three editors say that while the book critically explores the challenges of sustainability, it is also solutions-focussed book. Many of the book's 25 chapters offer various ways of trying to overcome the potential for impact on these animals, taking account of different regional and national contexts, and employing insights from relatively successful models such as Shark Bay and Kaikoura in New Zealand.

Professor Higham adds “for example, the book includes a chapter by Wiebke Finkler, a current University of Otago PhD student, who addresses science communication and the yawning gap that exists between the good science that has emerged about this in the last 30 years and the uptake of that science by management agencies, NGOs and tourism operators.

The book came about following lengthy conversations between Professor Higham and Associate Professor Bejder at a conference in Perth in mid-2006. They agreed there was a real need to comprehensively address the subject of human interaction with whales and dolphins. The proposal to edit a book, bringing together contributions by international experts, moved quickly to contract.

Professor Higham concludes “the publisher, Cambridge University Press, has been very supportive right from the start. But it's a book that has taken several times longer to complete than any other I have worked on. It has been quite a minefield. This is a contentious and political subject.”

Whale-watching: Sustainable Tourism and Ecological Management is published by Cambridge University Press and costs AU$140. It is available from www.cambridge.org/au/academic/subjects/life-sciences/ecology-and-conservation/whale-watching-sustainable-tourism-and-ecological-management