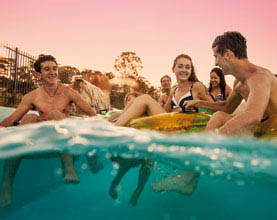 The opening of the Wet'n'Wild Sydney waterpark boosted Village Roadshow profits by almost $6 million in its first few weeks of operation.

Village Roadshow's just published half year accounts show that more than 160,000 season passes were sold for the new Sydney waterpark prior to its opening on 12th December, generating $12.5 million in revenue.

Attendances at the new attraction have also exceeded the company's expectations, with more than 400,000 passing through the gates of the western Sydney water park up to the end of January.

In advance of opening, Village Roadshow had predicted a million visits a year.

Village's half year accounts showed that its Village Theme Parks division made a pre-tax profit of $5.8 million in the six months to 31st December.

However, $5.5 million in pre-opening costs, plus another $3 million in spending on the Theme Park Capital campaign (undertaken with Ardent Leisure and the Queensland Government) contributed to a 46% fall in the company's half year profit.

Overall, Village Roadshow made a profit of $18 million in the first six months of the 2013/14 financial year, down from $33.5 million in the same period a year earlier.

With the benefit of earnings from Wet'n'Wild Sydney in the second half of the financial year, the company expects its full year profit to be slightly higher than the previous year's $50.9 million.

In a statement, Kirby explained "the opening of Wet'n'Wild Sydney has been a huge success and will pave the way to our future growth prospects in China and South East Asia, demonstrating we have the skills and ability to not only manage, but also build, worldclass theme and water parks."