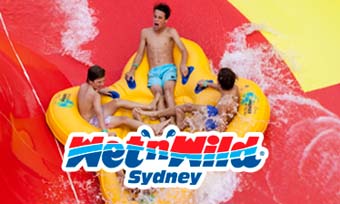 Australia's newest waterpark, Wet'n'Wild Sydney, is to open on 12th December and will soon welcome Western Sydney's first ever nippers club as part of a unique partnership with Surf Life Saving NSW.

Providing an update on the park and its progress towards its December opening, Wet'n'Wild Sydney General Manager, Chris Warhurst explained "the day we open will be one of the most anticipated dates in Sydney's recent tourism history.

"The park will feature the very latest in consumer focussed technology to ensure each and every guest makes the most out of every visit."

Warhurst said constructing the park had demanded the best logistical and technological minds with more than 35 kilometres of piping, almost enough to get from the site to Bondi, and 25 kilometres of electrical cable

Details and names of many of the rides have been released including the 360 Rush, Half Pipe, Tropical Cyclone, Double BOWLSeye and Boomerang Bay named by Facebook fans in a recent competition.

"The 360Rush is something never before seen in Sydney. Promising to make riders shake in their swimmers, those brave enough will race side by side in two sets of duelling 360 degree looping waterslides after falling 12 metres down a trap-door and reaching speeds of 60 kilometres per hour."

With the new waterpark set to provide a beach well away from Sydney's coastline, Warhurst announced that it will also feature the Wet'n'Wild Sydney Nipper Club, a partnership that Warhurst believes will be a great fit for the attraction.

Warhurst added "we're really excited about partnering with Surf Life Saving NSW in creating a nippers club unlike anywhere else in Australia.

"This is a fantastic opportunity as not everyone lives near the coast and many people rarely visit the beach so it's great to see the kids of Western Sydney won't miss out on all the fun enjoyed by the other 30,000 Nippers in NSW."

• A massive wave pool and sandy beach with a 2 metre high surfable wave
• The world's first combination of a 4-loop and 8-lane racer waterslides
• The world's tallest Double SkyCoaster - lifts passengers to a height 10 metre higher than the sails of the Sydney Opera House, before they plummet to earth - face first - at 120km/hour.
• The largest aquatic play zone in the world length of a full-size football field
• A Lazy River attraction the length of two full-size football fields
• Access and purchases will use the latest RFID technology - from entering the park, to purchasing food and opening a locker.

So far Wet'n'Wild Sydney has delivered more than $100 million into the local economy in construction. The park is expected to generate local economic activity in excess of $500 million in the first 10 years of operation.

For more information go to www.wetnwildsydney.com.au/