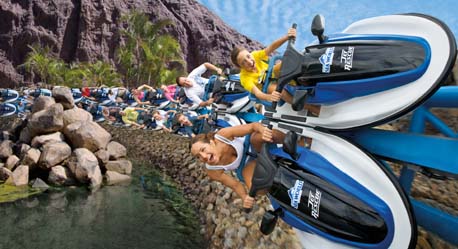 Village Roadshow has warned that profits may dip as much as $10 million this year after "shocking wet weather" affected its theme and water parks' operations during their peak season in December and January.

Saying it had "erred on the side of the over-informing the market" the group, which has interests in cinema, theme parks, film production and distribution yesterday (25th February) reported that interim net profits had fallen from $18.1 million to $13.3 million.

Chief Executive Graham Burke blamed the performance on the "wettest summer for 50 years in Sydney and for 60 years in Queensland" as well as several underperforming theatrical releases at its film distribution business.

Burke estimated that Village's attributable net profit, before material items and discontinued operations for the full year will be in the range of $46 million to $52 million, down from a full-year result of $56.5 million.

Burke told The Australian Financial Review and Business Day "our guidance is what it is because we want to err on the side of overinforming the market. This is worst case scenario.

"However, we will be fighting like tigers to offset the rotten weather with a number of initiatives between now and June 30."

Burke added that on some days the company had to close its Wet'n'Wild water parks in Queensland and NSW due to "pelting rain".

The company is now planning a series of cost cutting measure and promotions activity in an effort to boost profits, which were down at each of its three main divisions, theme parks, cinema distribution and film distribution.