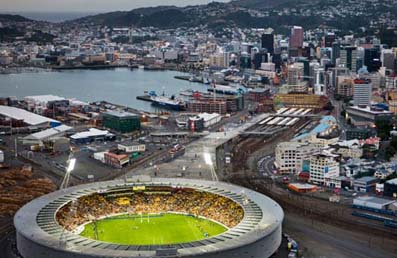 Wellington’s Westpac Stadium will be opening its turnstiles on Saturday 25th July to mark its 15th birthday with celebrations and a special birthday party.

From 10am to 3pm, as part of the Wellington 150th Open House event, attendees will be able to test their sporting skills on the venue’s turf, take a guided behind the scenes tour or visit a children’s activity zone.

The Open House is a city-wide event with more than 30 national institutions open to the public at no charge. A free hop-on, hop-off bus service, sponsored by Go Wellington, will take visitors around the Open House circuit with the closest stop for the Stadium at the Wellington Railway Station.

Later in the evening, Wellington will celebrate with a ‘Big Birthday Party’ at Parliament Grounds with a spectacular 3D light and sound show that brings the city’s history to life.

During the recent ICC Cricket World Cup 2015, Westpac Stadium celebrated its eight millionth patron since opening its gates in 2000.

In its previous 15 years of operations, the venue has hosted around 500 sport and entertainment events. With an average of 48 event days over the last three years, Westpac Stadium is well established as the busiest stadium in New Zealand.

A 15-year economic impact study released by consultants BERL in 2014 demonstrated that almost 7.8 million visits have been made by people attending events at the Stadium. Of these visits, around 1.8 million have been from people outside the Wellington region spending an additional $889 million in the region’s economy, more than two and half times original estimates.

Long term, the Wellington Regional Stadium Trust which manages the Westpac Stadium has plans to redevelop the venue by opening it to its Wellington waterfront location, letting in more light and views of the waterfront and city.

The plan includes new mezzanine hospitality areas on the concourse providing great places for patrons to meet before and during events, and take in the Stadium's stunning location.

The redevelopment would include new standing areas at the back of the seating bowl to allow room for fans to socialise while still watching the game.

The final phase of the Master Plan would  see a dramatic change to the look of the Stadium with new exterior cladding, as well as covering the entrance way and providing increased shelter along the Fran

The Trust has a 10 year time frame for these developments.

Click here to view a presentation video of the masterplan.