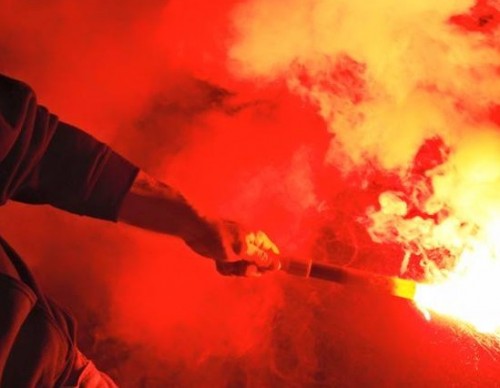 A-League leaders Western Sydney Wanderers say they are searching for ways to better prevent fan misbehaviour at their away games.

With travelling fans letting off a total of 25 flares in and around Melbourne's Etihad Stadium on Saturday night (6th February), when Wanderers played Melbourne Victory, the club are facing a loss of A-League points or fines after being issued with a show-cause notice by Football Federation Australia (FFA).

Wanderers Chief Executive John Tsatsimas has stated that the club had largely eliminated problems at their home games where only members could enter the Red and Black Bloc section at Pirtek Stadium.

However, he said away games remained an issue because any member of the public could buy tickets for the designated supporters bays.

Tsatsimas told the Big Sports Breakfast "tThese incidents have started to happen because we have instituted a program ... which limits the number of incidents at home

“Non-members are now finding opportunities to get into venues that aren’t Pirtek Stadium, and that’s where the complications and the issues arise. It was profound on the weekend and we are concerned and we need to do something about it.”

Tsatsimas suggested the measures implemented at Pirtek stadium, which include all non-RBB members being forced to sit in allocated seating, would be included as part of their response to FFA.

The last flare incidetn at Pirtek Stadium came in the 2014 Asian Champions League match against Ulsan Hyundai, where multiple flares were ignited. On that occasion, the match was run by the Asian Football Confederation, and not the club, with seating restrictions were not in place.

The upcoming Sydney derby at Allianz Stadium on 20th February also stands at risk of incident, with the club’s supporter bays again open for anyone to buy tickets to enter.

Tsatsimas says the club are now working towards stronger communication with away venues to avoid a repeat of Saturday night’s ugly scenes, adding "we are committed to eradicating that from our club.

“There’s an element there that on the weekend demonstrated a flagrant exhibition of petulance, belligerence and rebelliousness that won’t be accepted.”