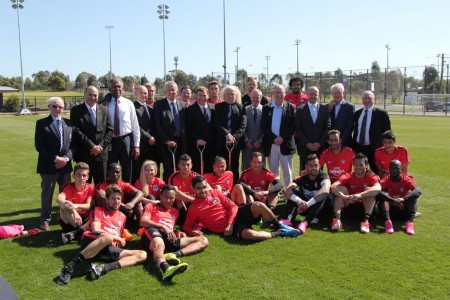 A-League club the Western Sydney Wanderers has announced a partnership with Blacktown City Council that will see the club make the Blacktown International Sportspark its long-term base.

Having been actively involved in helping develop future stages of the Blacktown Football Park (BFP) project with the Council, the Wanderers have now entered into a formal agreement which will make the Sportspark the Club’s training and administration home.

To be located to the east of the existing artificial turf venue at BFP, full details of the facility have yet to be finalised within the master plan for the site – managed by Blacktown Key Venues. However, the initial phase of the project will see three 1st class turf football fields constructed to compliment the FIFA rated floodlit synthetic field, seating, office accommodation and changing rooms that is home to the largest football association in NSW - Blacktown District Soccer Football Association.

Thereafter, facilities including up to eight new football fields (including the three artificial turf surfaces), a specialist half-training field and associated infrastructure, parking and landscaping are being considered with the eventual aim being a base with an aquatics recovery area,  indoor hall, sports science analysis rooms, gym and hospitality facilities for not just the Wanderers but all Blacktown International Sportspark Sydney stakeholders and the community.

Wanderers Chairman Paul Lederer said this development is the result of a lot of hard work from all parties which will deliver a prized asset for Western Sydney and result in an exciting future for the Wanderers.

Lederer explained “I am delighted that we have the opportunity to set down permanent roots in Blacktown and create a base that will be an incredible asset to Western Sydney.

“Along with the announcement last week of our new stadium in Parramatta this is a very exciting time for the Wanderers and for the future of football in our region.

“We have the tools and the support to make a significant impact in the Australian sporting landscape and we plan to take this opportunity with both hands to deliver exceptional outcomes to our fans, members and our community – mark my words, this is a game changer.” 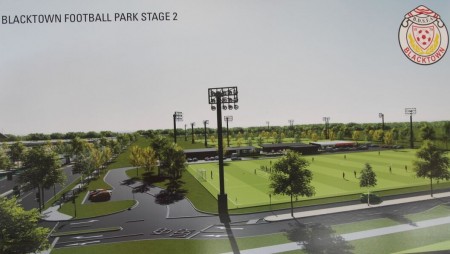 Wanderers Chief Executive John Tsatsimas said that the announcement would not only drive football in the region but will maximise the Wanderers elite pathway creating the next generation of stars of the game.

Tsatsimas stated “our academy structure will be the backbone of the Club’s future and securing our headquarters in Blacktown allows us to be a central point in the growth of the region and the growth of football in this country.”

Blacktown and Districts Soccer Football Association Chief Executive Jack Taylor is looking forward to the positive impact the development will have on the growth of Football in the region.

He concluded “this next stage of the project will be a major boost for our 22 clubs and 10,300 players registered with our association.

“For our Spartans’ National Premier League teams this will enable us to host home games across all divisions and major football competitions.”

Images: Dignitaries and Western Sydney Wanderers at the announcement of the partnership (top) and the plan for Blacktown Football Park (below).