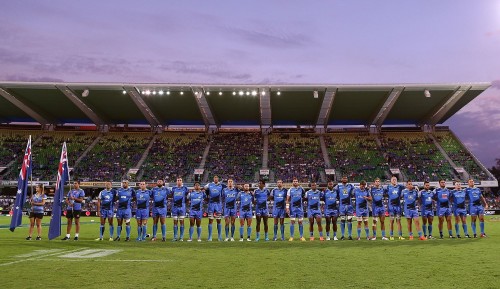 The Western Force Super Rugby franchise has issued a strongly-worded statement in response to reports that it was to be axed from the competition.

A report from News Ltd today said a decision had been made to axe the Force should South Africa agree to drop two teams and Australia one in a new 15-team Super Rugby format, reportedly agreed on in principle at a SANZAAR meeting earlier this month.

Over recent weeks there has been speculation any one of the Force, Melbourne Rebels or ACT Brumbies could be cut it the current 18 team competition be downsized.

The Force responded with a statement adamant that it would continue.

It read "under no circumstances do we believe today’s speculation around the future of the Road Safety Western Force to be true.

"Two-and-a-half weeks ago, through a national phone link-up all clubs were told that the ARU through the governing body, SANZAAR, was investigating a number of issues and those issues had to be resolved prior to a decision being made to reduce any of the Australian franchises.

"There has been no further contact from the Australian Rugby Union to any of the Western Force players or staff, so at this time there is no further comment on the matter until substantiated facts are put forward."

Western Force has struggled both financially and on the field in recent years, and last year launched a new membership scheme to give fans the option to own a part of the club.