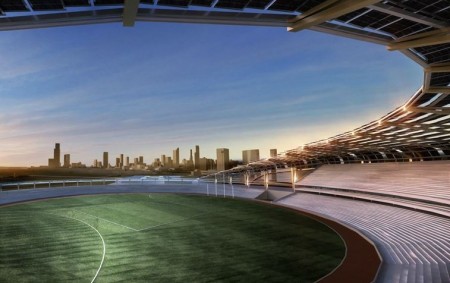 Gordon - who also revealed his club made more money out of its round 15 clash against Gold Coast in Cairns than all of its home games combined this year - said a smaller stadium was needed to maximise profits from games that drew between 25,000-30,000 fans.

Gordon repeated his recent claim that the Bulldogs’ deal with Etihad Stadium was holding the club back financially, highlighting that it was a reason why the team chose to play a ‘home’ game against Gold Coast two weeks ago in Cairns, which attracted 9,449 fans.

"We made more money out of playing one game in front of less than 10,000 people in Cairns a couple of weeks ago than all our other home games (this year) put together."

Gordon suggested the construction of a ‘clean’ stadium could boost the Bulldogs’ revenue by "$2 to $4 million a year."

At various times in recent years the AFL has looked at ideas for a third major stadium in Melbourne, considering upgrading either Princes Park or Punt Road Oval (pictured above) as a 'boutique' 25,000-seat stadium.

Click here to view the article by Niall Seewang at AFL media from which parts of this report have been sourced.