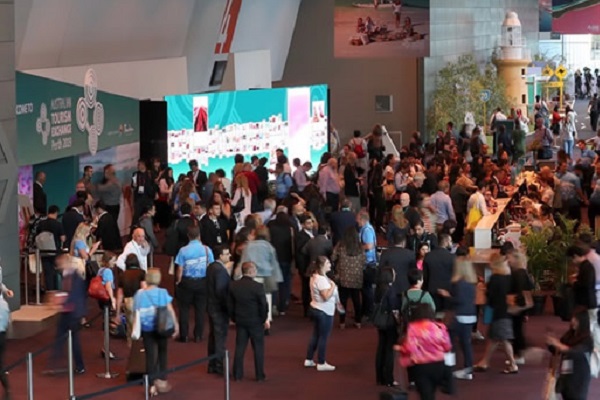 About 40 tourism students from South and North Metropolitan TAFEs have been playing an important role at the annual Australian Tourism Exchange (ATE), which is being held in Perth this week.

The event has also brought more than 1,300 sellers from more than 550 companies to Perth, and is expected to deliver around $9 million to the Western Australian economy.

The TAFE tourism student volunteers have been performing roles ranging from event officers to delegate experience officers, providing support and information services to delegates across a number of locations including the Perth Convention and Exhibition Centre, Perth Airport and event locations.

All volunteer work carried out will be assessed as part of the students’ TAFE courses, while also providing them with a unique opportunity to contribute to one of the biggest tourism trade shows in the world.

The students are working alongside Tourism Western Australia, Tourism Australia and Western Australia Visitor Centre staff over the course of the event, enabling them to network with tourism industry professionals and gain valuable industry insights.

Tourism WA held three comprehensive training sessions for the students, including ATE orientation, role-specific training and venue-specific training, and will offer them a guided walk-through of the trade show floor during the event.

Commenting on the student’s involvement, Western Australian Tourism Minister Paul Papalia stated “it is wonderful to see this collaboration between Tourism WA and tourism students from North Metro and South Metro TAFEs for ATE19.

“Being involved with the ATE will undoubtedly help the students with future employment prospects in the tourism industry once they graduate, and also provide a welcome helping hand to Tourism WA and WA Visitor Centre staff over the course of the event.”

The Western Australian Government, through Tourism WA, is hosting ATE19.

Some of the top buyers in Tourism WA's key international markets will be represented at the ATE, including well-known international companies Helloworld, Thomas Cook and Flight Centre.

5th February 2018 - The Value of Higher Education to Global Tourism