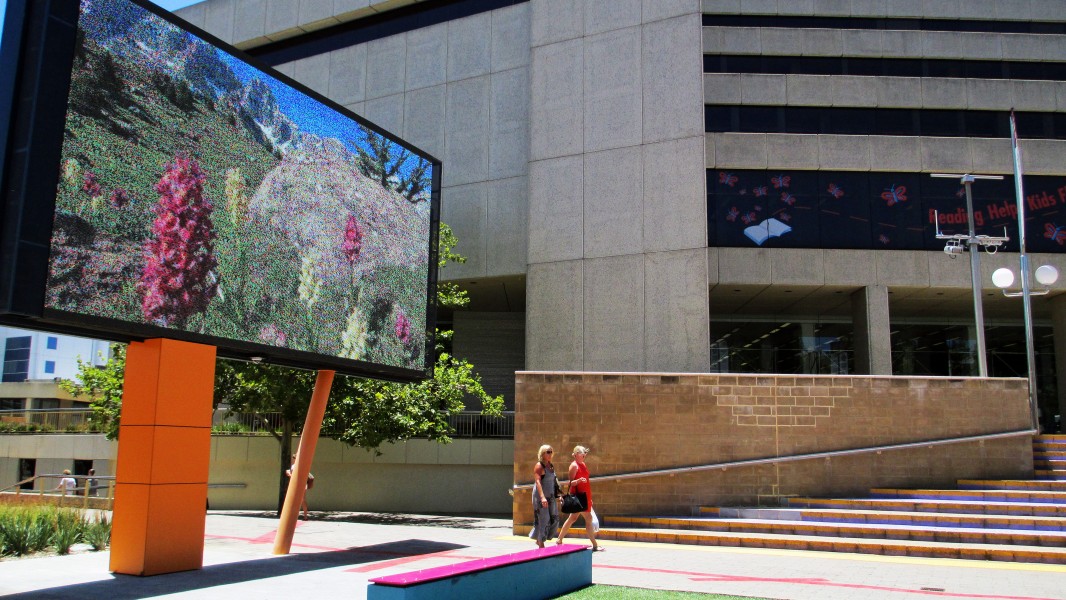 An LED screen, feature lighting and a new children's play space are some of the latest improvements to be undertaken by the Western Australian Government in the Perth Cultural Centre.

Western Australian Planning and Culture and the Arts Minister John Day said that the precinct was continuing to be transformed to create a place that people want to visit and to provide a premier events destination.

"Highlights of the next stage of works include the installation of a new nature-inspired children's play space in front of the WA Museum, and a giant LED screen in the James Street mall amphitheatre."

The Minister said the LED screen would be used to promote activities taking place within the Perth Cultural Centre and to allow live screenings of performances from a range of arts venues, continuing

"other improvement works include additional shade for the Urban Orchard, new directional signage throughout the Perth Cultural Centre, further security upgrades and the installation of feature lighting.

"A new play space for children and additional shade will complement features such as the free WiFi access, the Urban Orchard and Native Wetland, and make a visit to the Perth Cultural Centre an even more comfortable and engaging experience."

Works will be carried out over the coming months and will be completed in time for the 'People's Space' that will be held in the centre during the Commonwealth Heads of Government Meeting in October 2011.

EPRA is also developing a Place Plan which will set the long-term vision for the area and drive ongoing activation strategies and physical improvements.

Minister Day added that a series of events will continue to enliven the Perth Cultural Centre over the coming months including planting days, family activities and community talks with leading industry experts, concluding "the State Government's revitalisation works and place activation initiatives are providing a reason for people of all ages, at all times of the year to rediscover the cultural heart of Perth."

Children's Play Space: The children's play space has been designed with a focus on play and sensory elements inspired by nature. It will encourage creativity and imagination and features large carved timber animals, walking logs and timber platforms as well as a mural, drums, chimes and other mounted instruments. The primary age group for the play space is six to13 years; however it will cater for most age groups.

LED Screen: Inspired by urban screens from around the world, the Perth Cultural Centre LED screen will provide opportunities for the resident cultural institutions and other arts organisations to share content, experiences, ideas and innovations with the general public. The screen will be 36sqm in size to ensure it can be viewed throughout the centre.

Security Upgrades: The addition of seven new CCTV cameras and three emergency phones will further improve safety and security throughout the Perth Cultural Centre. This is just one part of an overall security solution being implemented by EPRA, with other security enhancements in the centre including security patrols, improved sightlines and enhanced lighting.

Feature Lighting: Feature lighting including colour changing tree up-lighting, lighting to various heritage facades throughout the precinct, and image projections and digital effects will be used to activate and add interest to the Perth Cultural Centre.

For more information go to www.perthculturalcentre.com.au