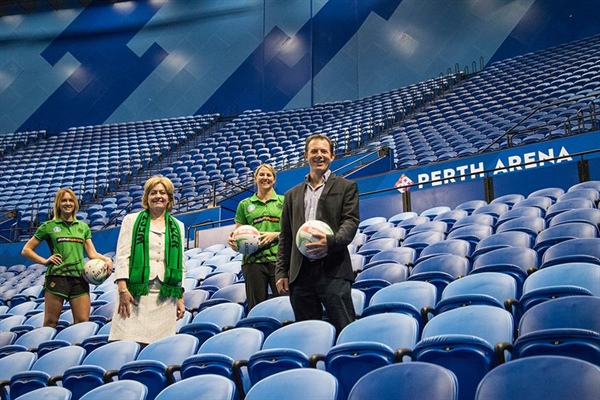 West Coast Fever has announced an official partnership with the City of Perth for the inaugural season of the new National Netball League in 2017.

Perth Lord Mayor Lisa Scaffidi said the City was proud to lend its support to the most popular professional women’s sport in Australia.

Lord Mayor Scaffidi stated “we expect these games to attract an additional 36,000 people into the City of Perth and not only will it add vibrancy to the precinct, it will deliver significant financial return for our local economy.

“Since the Perth Wildcats called this venue home, I’ve enjoyed seeing the ‘Red Army’ flood City streets on game days and I look forward to a sea of green as the West Coast Fever fans descend on Perth Arena.”

Taylor added “(this) marks another fantastic step forward for our Club and I would like to thank the Lord Mayor and Council for their vote of confidence.

“To become Perth Arena’s third sporting anchor alongside the Hopman Cup and the Wildcats is a clear indication of both how far our game has come in recent years, and the significant growth that lies ahead of us.”

“It is the best netball venue in our competition and I look forward to seeing our Members and fans turn up in numbers to transform Perth Arena into a fortress for our Club.”

In addition to the four home games, Fever will officially launch its season with a public event in the city, as well as host a corporate function and conduct a series of free community netball clinics at City of Perth venues as part of the partnership.

The full fixture draw for the 2017 National Netball League season is to be unveiled as of Monday 7th November.