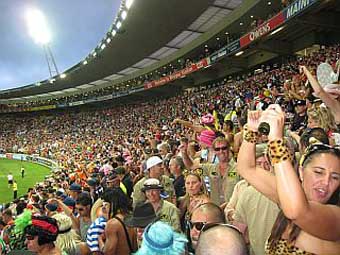 Organisers of the Wellington Rugby Sevens (7s Wellington), report that ticket sales are "a little bit slower than we had hoped" for the event being held over the weekend of 30th and 31st January.

Tournament General Manager Steve Dunbar told the Herald on Sunday "every event organiser wants to put out the 'sold out' sign, but it's more difficult for us now to sell tickets so we've made a lot of changes over the last year - we've now got seven different price categories and tickets are cheaper than they've ever been before."

Often a sell out in its early years, the event attracted a crowd of just 18,000 on both days in 2015 event, last year with the final weeks seeing wide-ranging ticket discounting to attract crowds.

Changes for this year see the Wellington Sevens shift from shift from being staged on Friday and Saturday to Saturday and Sunday, and the event being reinvented as part of a package including the Wellington Cup. The Sevens’ dates also coincide with Auckland Anniversary Weekend, making it easier to target out-of-towners.

With the contract to stage the event as part of HSBC World Sevens Series running out this year, Dunbar believes the will help build on previous work to make the event more family-friendly after drunken crowds in previous years drew criticism from police.

The event also aims to offer better rugby, with several All Blacks joining the code in a bid to make the squad for the Rio Olympics.

However, Wellington Chamber of Commerce Chief Executive John Milford believes that the event “has it's back against the wall.”

Writing on Stuff.co.nz, Milford explains there was a time when the Wellington Sevens were “brilliant” and “unstoppable”, “tickets would sell out in seconds, crowds would pack the streets for the parade, and for two days the stadium would pulsate.

“Oh, how the mighty fall, and for the past couple of years organisers have struggled to sell tickets.

“What happened? Was the breakdown of the ticketing system in 2013 the last straw for people looking for something new? Was it changes to alcohol legislation, bad publicity caused by stupid incidents, the success of the Auckland Nines?

“Or was it, as some have been saying for some time, that the organisers and city sat on the model for too long, reluctant to change it because it didn't look broken, but not seeing that staying ahead of the game, not just up with it, could be the key to longevity?

“Whatever the reason, the question is what we do about it, because it's clear that sales for next month's event are not a whole lot better than for this year and there's a question mark over the future.

“It's not for lack of trying. The organisers have reinvented the pricing packages, tweaked the food and beverage, and switched to Saturday and Sunday and into Wellington Cup week. It will be much more family friendly. It could be too late, but they've done what they can and now it's up to us.

“We must all remember that the Sevens is not just an event – its economic dynamo for the city and the region, at one stage contributing some $15 million to our economy each tournament.

“With the contract up for grabs next year, it's really beyond 'use it or lose it' time. Rugby Union boss Steve Tew hinted at such when he said Wellingtonians are not supporting it ‘to a level any of us would like’.

“Business puts a lot into the Sevens – the city council's contribution comes directly from business rates. Maybe in this crucial tournament, companies could try something different – look at bulk purchases for staff as team-building exercises, or for clients as promotional tools?

“Have we missed the opportunity to reinvent the tournament in the success years, as the Hong Kong 7s are constantly doing? What other major events are at risk of the same fate?

“There is a point where the cost of attracting the events exceeds the economic benefits – but in this example, have we just let it get that way?”