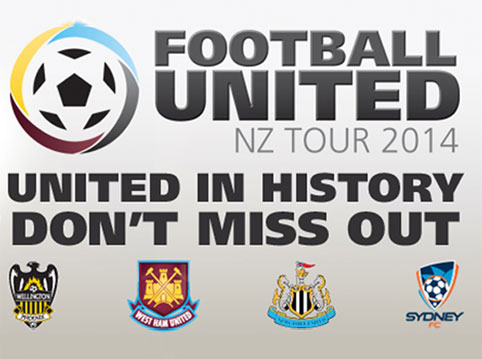 Wellington Phoenix will make history when they host English Premier League sides Newcastle United and West Ham United as part of a 'Festival of Football' in July 2014.

In a football extravaganza centring on Wellington, but also taking in Auckland and Dunedin, sports fans will be bale to take in pre-season tour games by the leading English clubs.

Sydney FC will also feature in what Phoenix is billing as the 'Football United Tour 2014', which will see Newcastle take on Sydney FC at Dunedin’s Forsyth Barr Stadium on Tuesday 22nd July, Phoenix play West Ham at Auckland’s Eden Park on Wednesday 23rd July and a final double-header at Wellington’s Westpac Stadium on Saturday 26th July where Sydney FC will take on West Ham and the Phoenix will play Newcastle United.

Commenting on the games, Wellington Phoenix Chairman Rob Morrison stated "all of New Zealand will be able to be part of this unique sporting event, with Newcastle United journeying to Dunedin and West Ham United to Auckland, with both sides finishing their tour with the double-header in Wellington."

Ticket prices for the matches, arranged by the Phoenix with the support of the Wellington City Council, are set to be very reasonable, starting at just $35 for adults and $16 for a child for the Westpac Stadium matches.

The West Ham United team is likely to feature All Whites captain Winston Reid, who added “I’m really excited to be bringing West Ham to New Zealand in July to play a bit of footy in the Football United Tour and show them how we do things in New Zealand.

“New Zealand is a beautiful country full of great people and I’m sure all the West Ham players, staff and supporters who make the trip will have a fantastic time.

“Football is really on the up in both New Zealand and Australia and we are all looking forward to meeting all the fans and playing exciting matches against two leading Hyundai A-League clubs.”

West Ham Manager Sam Allardyce is also looking forward to bringing a team to New Zealand for the first time in his managerial career.

Allardyce commented “we’ve been busy putting together the best pre-season preparation that I’ve had, and it’s great that we’re able to go to New Zealand as a key part of that.

“The tournament in New Zealand is particularly interesting, as it allows us to promote West Ham United and the Premier League over there.

“It’ll be great for our fans in the region to see us play.”

Newcastle United Manager Alan Pardew added “we are very much looking forward to being part of the Football United Tour and to training and playing at first class facilities in Dunedin and Wellington.

“Football has grown impressively in both New Zealand and Australia in recent years, with some excellent players and teams coming to the fore, so the Wellington Phoenix and Sydney FC fixtures will provide a good test for our players as we prepare them for next season.”

There will also be a series of 'Festival of Football' event in Wellington on 26th July.