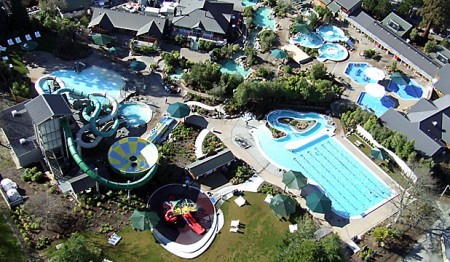 The opening of a NZ$7.5 million extension at Hanmer Springs Thermal Reserve in December has boosted the New Zealand attraction's holiday season performance.

The centrepiece of the expansion is the SuperBowl water slide. Starting 15 metres above the ground, thrillseekers on inflated tubes are flung down a long curving tunnel and reach maximum speed just before entering a large blue-and-yellow funnel with a central tower.

Momentum and water riders around the bowl several times before they are swept into the tower's hole and hurtled via another tunnel to the ride's end.

Other upgrades include a trio of adult-only aqua-therapy pools; a freshwater pool, with swimming lanes and a lazy river; along with a child's aquaplay area with a mini waterslide, water cannons and a tip bucket.

Speaking of the redevelopment, Hanmer Springs General Manager Graeme Abbot told local media "we're an entertainment facility - and if you don't keep changing your offering, people get a bit bored with you."

The hot pools earned the council $1.5 million in the last financial year with the extension is expected boost that to more than $2 million.

Abbot added that earlier improvements had increased visitor numbers by up to 10%.

However, he expected a lower "uplift" this time because of the economy and the Canterbury earthquake.

For more information go to www.hanmersprings.co.nz/thermal/about