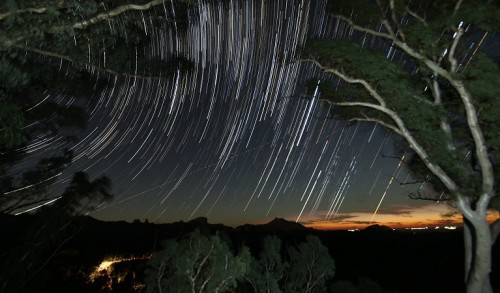 Minister Stokes said the park’s dark sky qualities will be protected with $100,000 in funding to control light pollution through implementation of updated planning policies. A new Dark Sky Planning Guideline has also been developed with the Australian Astronomical Observatory as part of the NSW Government’s review of state planning policies.

He advised “Warrumbungle National Park has long been recognised not only for its beauty at ground level, but also for the wonder it holds in the night sky above.

“It’s an outstanding place to view the night sky and, with the nearby Siding Spring Observatory, plays an important role in Australian astronomical research.

“As nearby communities grow, it’s important we plan to protect the park’s dark sky qualities from light pollution now and into the future.”

Minister Speakman said the Dark Sky Park’s status would benefit the environment as well as stargazers, adding “light pollution has a detrimental effect not only on professional and amateur astronomy, but it also impacts on those parts of the ecosystem, such as nocturnal animals, which are reliant on dark night skies.”

Professor Watson stated “I am thrilled with the new Dark Sky status, which will give central western NSW the opportunity to educate and exemplify the benefits of dark skies and the use of sky-friendly lighting.”