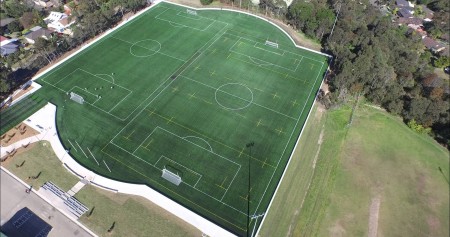 A $4.3 million project to provide a massive 17,000 metre² artificial turf sporting facility has been opened at Melwood Oval on Sydney's Northern Beaches.

The major new regional sporting facility offers two synthetic football fields for the local Forest Killarney Football Club, with one of the fields being a dual-purpose rugby field. The entire surface can also be used for AFL and cricket.

Installed by Melbourne-based Turf One, the fields showcase the FieldTurf Revolution system, with the project also including the new ANZAC Memorial Pathway around the neighbouring Forestville War Memorial Playing Field.

The installation of the fields began in April and is now expected to boost local sport participation.

Warringah Mayor Michael Regan said the project was completed ahead of schedule and on budget, stating "the synthetic fields are the size of the SCG and will become another key regional sporting facility for the northern beaches and beyond.

“It’s been very hard for staff to maintain such a busy ground. Now we can see 60 hours of sport played every week on a first class surface – in all weather."

Forest Killarney FC President Scott Larsen added "we’re excited about an all-weather facility where we can train and play no matter what the weather is doing.

“It will be conducive to better football (as it) will provide such a true, even bounce. It will improve the standard.”

Mayor Regan said the facilities would create a recreation hub and allow sports to be played more often, adding to other Northern Beaches venues - Cromer Park and Narrabeen Sports High - which already have synthetic fields.

Both of those facilities feature surfaces installed by Turf One, whose other recent NSW projects include Blacktown Football Park in Rooty Hill, Cammeray Oval and Northbridge Oval, as well as Prince of Wales Park in Ballarat and for Moreland City Council (Victoria) at Clifton Park.