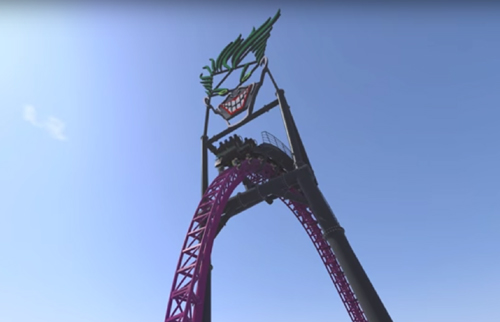 Dubbed “a game-changer for Australian theme parks”, the new ride is expected to boost attendance at Village Roadshow Theme Parks, which have been impacted by last year’s fatalities at Dreamworld.

“At almost double the length of any other ride in Australia, the DC Rivals HyperCoaster is transformative for our theme parks and we are excited that guests are now able to experience this world-class ride.

“With a series of impressive features including one of the world’s first non-inverted loops, a Stengel dive and giant airtime hill, the DC Rivals HyperCoaster is a must-do for theme park guests.”

The DC Rivals HyperCoaster is themed around famous DC Super Hero character, Batman, and features a world-first design with the back two seats facing backwards to allow guests to do the ride in reverse.

Kirby added “this is one of the most technologically advanced rides in the world and features state-of-the-art safety and operating systems to ensure the most thrilling rides all for guests.”

The DC Rivals HyperCoaster, created in partnership with Warner Bros. Consumer Products, was supplied by Mack Rides of Germany.