Warner Bros. Movie World is today celebrating its 25th anniversary in true Hollywood fashion with a party featuring a giant cake and the Looney Tunes characters in attendance to start the festivities.

Since the official opening in 1991, the Gold Coast theme park has welcomed over 20 million guests to the park and become one of Australia’s most popular attractions.

Magill stated “Movie World holds a special place in many people’s hearts and it is great to be able to play a part in making memorable family moments.

“Movie World also provides a diverse and enjoyable employment environment on the Gold Coast. As a team member who has been with the park since it opened it is great to be able to participate in these celebrations.

“For the past 25 years Movie World has offered unique entertainment options for the entire family with a range of world-class rides, attractions and shows including crowd favourites Superman Escape and the Scooby Doo Spooky Coaster. 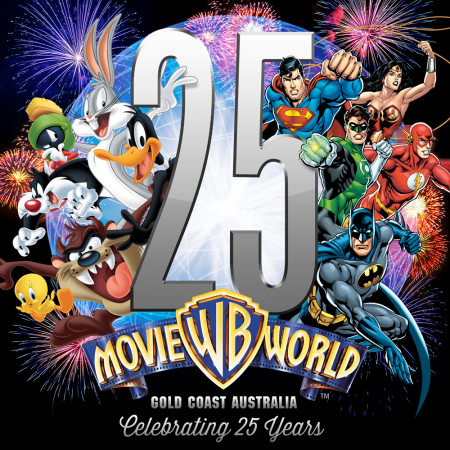 “We have a number of significant developments planned for the future including the all-new DC Comics Super-Villains Unleashed and the Doomsday Destroyer opening in October to ensure our guests continue to enjoy the best theme park experience.”

Set to open in October, DC Comics Super-Villains Unleashed will be an immersive themed area centred on a new looping ride to be known as the Doomsday Destroyer.

At the end of last year, Village Roadshow also announced plan for a new a nine-storey hotel and a new attraction and lakeside precinct.