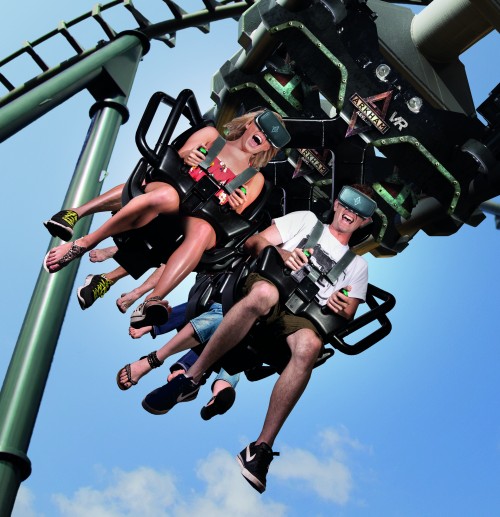 Warner Bros. Movie World has announced a unique and immersive experience for guests with the launch of the Southern Hemisphere’s first Virtual Reality rollercoaster experience opening in September 2016.

The Gold Coast theme park’s Arkham Asylum coaster, which was developed in partnership with Warner Bros. Consumer Products on behalf of DC Entertainment, will be launching with Virtual Reality transforming the ride into a 360-degree experience with the technology seamlessly syncing the physical attributions of the popular coaster with the visual to take guests on a multi-dimensional journey while reaching speeds of up to 85km/h and pulling 4.2Gs.

Warner Bros. Movie World General Manager, Greg Yong said this is an exciting announcement for the park with the revolutionary technology sure to offer an all new experience for guests.

Yong stated “as Warner Bros. Movie World celebrates its 25th anniversary, we are excited to announce we are bringing this innovative technology to one of the most exciting, signature attractions at the park.

“With the addition of the Virtual Reality technology to the Arkham Asylum ride, which is inspired by Gotham City’s asylum in the world of DC’s Batman, guests will experience the synchronization of thrilling twists, turns and loops of the coaster with the virtual world of high-definition imagery and visuals created.

“Guests will wear specialised Virtual Reality headsets as they embark on an epic multi-dimensional journey unlike anything ever experienced at the iconic Warner Bros. Movie World theme park.”

With the all new DC Super-Villains Unleashed and the Doomsday Destroyer opening this October, plus a major attraction announcement in the coming weeks, Warner Bros. Movie World is set to welcome a new era of entertainment for the Gold Coast and Australia.

For more information go to www.movieworld.com.au