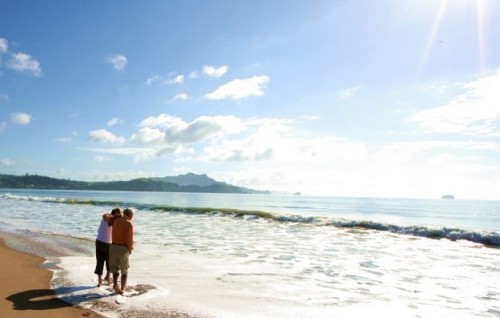 The 2016/17 testing to see whether faecal bacteria levels were below levels for contact recreation, such as swimming and surfing was the first such assessment since 2009. Its re-activation was part of a Council drive to gain better information about what’s happening in coastal waters and to provide a community service.

Between November and March, beach users can go to the Councils’ ‘coastal results’ website to check what the latest results are for the targeted beaches.

Results last summer were generally positive, with minor, temporary issues only reported for one week at Whitianga’s Buffalo Beach.

"The number of faecal bacteria present in the water indicate the likelihood of contracting a disease from many possible pathogens in the water such as bacteria or viruses.

"On our website, results from the monitoring programme are compared to national guidelines to determine the suitability for recreational use."

Dr Wilson stressed that water quality at Waikato beaches is generally high but caution should be taken following heavy rain. Heavy rain flushes contaminants from urban and rural land into waterways, which then make their way to the coast. These contaminants may be present in the water for up to 48 hours after heavy or prolonged rainfall.

Last summer’s issue at Buffalo Beach appeared to have been a blip, the sort of thing that can happen after heavy rain.

Dr Wilson added "bacteria levels there were back to normal by the time the next sample came in.”

If any issues of concern are identified, the regional council works with district councils and the Waikato District Health Board to assess results that may have public health implications and to provide the public with the best quality information.

Dr Wilson concluded “our monitoring programme, while it isn’t picking up major issues, will help provide assurance to the public going forward and help us track any trends or emerging issues>”

For more information go to www.waikatoregion.govt.nz/coastalresults