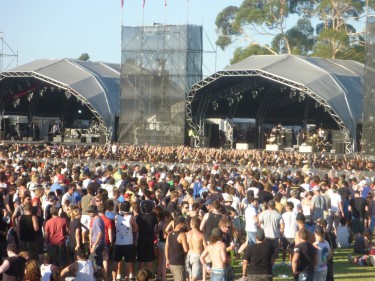 Festival goers in Western Australia have been warned to stay safe from the combined effects of drugs, alcohol and heat through the summer event season.

“Festival and event organisers need to ensure they are serving alcohol responsibly and that intoxicated people are not being served alcohol.”

Western Australian Police charged six people with drug possession and other offences during the November Perth Stereosonic music festival at the Claremont Showgrounds with Stereosonic events on the East Coast seeing deaths in Adelaide and Sydney and multiple overdoses in Brisbane.

Revellers are being reminded to apply sunscreen regularly and drink plenty of water during long events such as music festivals.

Mental health commissioner Timothy Marney said medical advice should be sought if someone experienced adverse effects from alcohol or drugs.

Marney commented “some people are hesitant to call an ambulance due to fear of charges being laid, but safety comes first and police will not normally attend unless ambulance officers are threatened or there is a death.”

He added that fans should also be aware that mixing alcohol and drugs could put them at greater risk of overdosing, adding “the depressant effects of alcohol can mask the effects of stimulant drugs like amphetamines.”