Volunteers the backbone of WA Sport 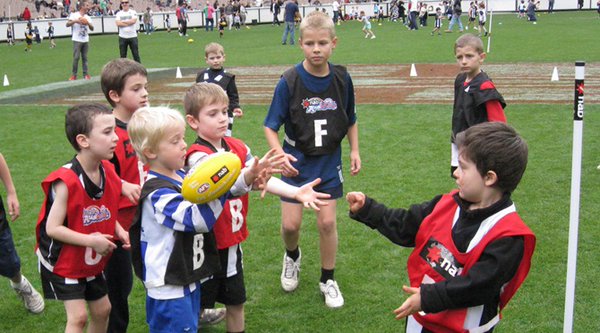 With the winter sports season looming, grassroots sporting clubs across Western Australia will again be relying on people giving up hours of their time for the organisations to function.

As the WA Department of Sport and Recreation's Vince Del Prete explains "volunteers are the backbone of the sport and recreation industry, it would not survive without them and recognition must be given."

While WADSR records show there are around 190,000 volunteers, Del Prete says the actual number of people who volunteer could be closer to 400,000.

"Mum and dad who jump behind the barbeque at a Saturday morning sporting event probably don't classify themselves as a volunteer, and yet, they are," Del Prete added.

They're also incredibly valuable to WA, worth around a billion dollars a year in free labour.

Scott Robinson, Auskick co-ordinator at the Mount Hawthorn Cardinals junior football club, is one of the many volunteers lining up to help out this season.

Robinson does much of the administration for the club; organising registrations, co-ordinating the training of coaches and organising the annual football program for 160 children from about 140 families.

But, he says the club just couldn't run without the support of family and friends.

"The whole club is volunteers, it's all parents. None of the players can actually do anything because they're all kids," he said.

"It can be a little bit hard to get people to do things like canteen duty and some of the less attractive jobs."

Not so, with coaching, where he adds "the dads like to show off their prowess to their kids."

Tom Pinder has spent years volunteering. As the immediate past junior president of the West Subiaco Junior Rugby Union, he says volunteers are vital, stating "you can have the best players in the world in your club, and the club is about the boys and the men who play in your team as well, but the club is only as good as your administration.

"Your volunteers are equally as important as your players. They're the ones who are going to make sure the teams get out there on the day, jumpers and balls are being bought, fees are being paid, that you fill the equipment out, that you've got a good financial and health model.

"Volunteers are the backbone of our rugby club and they're the unsung heroes."

Robinson agrees and says it's often the case that a small number of dedicated volunteers do the majority of the work.

"Whether it be schools, footy clubs or any other type of community group, there's always a core group of people who do the work.

"Those people are always nice, community oriented people, it's always nice to deal with them."

However, Pinder points out that being a volunteer can be a time consuming exercise, adding "at times I've taken leave to do work for the club.

"Being a president or holding a committee position, you can put anything in from five to ten hours a week and once the season kicks off, a lot longer."

He says that between training, game day, chasing up payments and registration forms, the time adds up.

But, it comes with a certain level of satisfaction and enjoyment out of it: "That's the reason you do it, because you get something out of it as well."

Robinson says his love of the game adds to the satisfaction, adding "I enjoy watching my kids play against their mates, and socially it's good. You get to meet a lot of new families that your kids don't go to school with so it's a great way to meet people.

"This is the first time I've ever really volunteered for anything in the community so I've really enjoyed it, and it's given me a bit of enthusiasm to do other things in the community."

For Del Prete and his team in 2011, they are focussed on supporting existing volunteers and attracting new ones.

He concludes "they're vital to those community organisations and in the regions they form a significant part of the community."