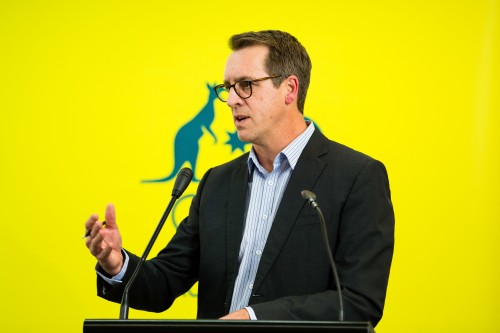 A new era has begun for volleyball with the announcement today that experienced sports administrator Andrew Dee has been appointed as Volleyball Australia’s new Chief Executive.

Carracher advised “we are excited to attract a sports administrator of Andrew's calibre to our sport and look forward to his passion for Australian sport motivating our volleyball community.

"Andrew has worked to support volleyball in various capacities since the 1990s and was recently responsible for the engagement of the Australian Sports Commission with Volleyball Australia preparing for Rio 2016.”

Dee (pictured) arrives at Volleyball Australia with a wealth of experience including 12 years as Rowing Australia Chief Executive, a variety of senior management roles within the Australian Institute of Sport over a 14 year period as well as a long association with Volleyball Australia dating back to 1996 in which he helped the organisation prepare for the Sydney 2000 Olympic Games success.

Commenting on his experience, Dee stated “I was responsible for activating the relocation of the national team programs to Canberra and created the training facility that remains today.”

Dee’s wealth of experience in sport and in leadership also extends to High Performance areas having held coaching positions with Australian Rules Football and also with the Australian Sports Commission as Olympic Athlete Program Manager.

Dee will take the reins from current Chief Executive Mathieu Meriaux who is stepping down for personal reasons after a very successful four and half years in the role.

The appointment of Dee is the next step in the exciting volleyball journey that has seen tremendous growth over the last four years that included the establishment of the now internationally recognised brand, ‘The Volleyroos’.

Dee commented “I’m excited by the opportunity Volleyball Australia’s indoor and beach national team programs and event calendar present, highlighted by our first ever participation in the Commonwealth Games.

“My aim now will be to optimise the benefits of these opportunities for volleyball in Australia, both on and off the court.”

“Volleyball is a diverse and exciting global sport and I am also really looking forward to working with our state partners to increase its presence in the Australian market.”

The plans for Volleyball have always been grand and now with the appointment of Mr. Dee the Volleyball Australia board believe they have got their man who can execute the ambitious vision.

Meriaux vacates the role on Friday 15th December with Dee beginning his tenure from 22nd January.

In the interim Volleyball Australia High Performance Director John Boultbee will be acting Chief Executive. Boultbee also has a long history with rowing and just last week was recognised at the World Rowing Awards in London with the 2017 Distinguished Service to International Rowing Award.