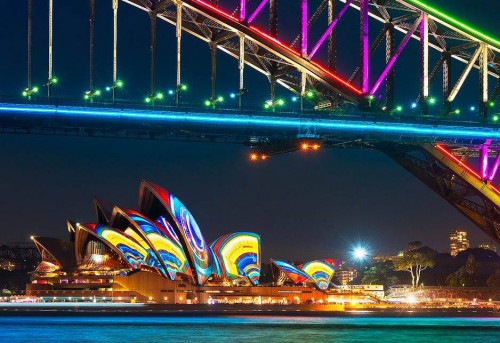 Newly released figures show that Vivid Sydney 2016 injected a phenomenal $110 million of visitor spend into the State’s economy according to NSW Minister for Trade, Tourism and Major Events Stuart Ayres.

In 2016 the NSW Government through its tourism and major events agency, Destination NSW made the strategic decision to extend the festival from 18 to 23 nights.

“$110 million in visitor spend is a huge result and is up 75% on last year’s figure. Not only did we smash visitor expenditure, we became Australia’s largest event with 2.31 million attendees experiencing the spectacular Vivid Sydney.

“Of these attendees, almost 184,000 were visitors who travelled to Sydney specifically for the festival, generating more than 621,000 visitor nights for the NSW visitor economy.

“Vivid Sydney continues to shine bright on the State’s events calendar. I congratulate the dedicated team at Destination NSW and the many Government agencies involved in delivering another sensational event and look forward to a brilliant return of the festival in 2017.”

Chipchase “our biggest ever program of light, music and ideas saw Vivid Sydney expand into new precincts including the Royal Botanic Garden Sydney and Taronga Zoo and present over 190 music and 180 ideas events. These initiatives supported by our marketing and partnership campaigns were instrumental in increasing both visitor numbers and the length of stay.”

Vivid Sydney 2017 will be held from Friday 26th May to Saturday 17th June.