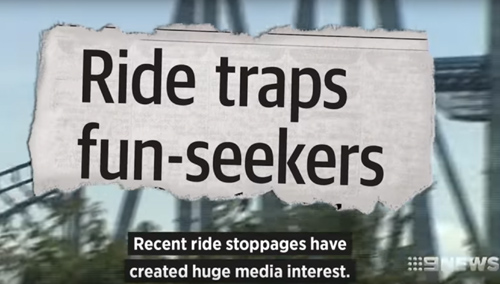 Village Roadshow Theme Parks has released the first two videos in a short series that aims to inform the public about ride safety.

In the wake of the four fatalities at Dreamworld last October and massive public and media scrutiny of ride safety at Australia's theme parks, the first YouTube video in the series focuses on the safety and maintenance systems followed for the Green Lantern ride at Warner Bros. Movie World.

Taking viewers behind the scenes, the video covers the hours of safety checks undertaken each morning, before opening, by Movie World’s maintenance and operations teams.

Given that the near-constant media scrutiny of the Gold Coast’s theme parks means that occasional ride malfunctions and stoppages receive extensive coverage, the video explains what a ride stoppage is, and how they’re actually a sign of safety systems working correctly.

"All our rides are engineered to stop in safe locations. Every ride has hundreds of sensors, constantly measuring and watching the ride.

"They're like the sensors in your car (and) while you might be able to drive off with that alert flashing, our rides will not."

The video explains that if just one sensor is "not happy", the ride system will shut down.

It continues “most faults are easily reset after a short inspection. However if we can't reset quickly, we'll decide to unload the ride. You as an individual have a very low chance of ever being unloaded. But because we run so many rides every day sometimes this will happen."

The video continues to go into detail on perhaps the most prominent incident of the summer – the Arkham Asylum evacuation with Erasmus noting that they train for a wide variety of situations in conjunction with emergency services such as the fire brigade.

She concludes “so when we had our recent Arkham Asylum stoppage we were fully prepared.

“It makes for a great news story, but for us it's reassurance that our safety systems are working and that we're keeping people safe.

"So safe in fact that people pay to take the Arkham Asylum lift hill climb as part of our Star Tour."