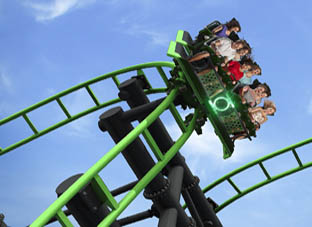 Village Roadshow Ltd, operator of Australia's biggest cinema chain and several of the country's major theme and water parks, has announced that it will form a $500 million joint venture with China's CITIC Ltd to invest in new theme parks in East Asia.

Advancing Village Roadshow’s long held plans to develop attractions in Asia, the partnership with Chinese Government-owned investment group CITIC Trust will establish an initial funds management business that will invest in new developments in the region, with a particular focus on China.

CITIC, formerly the China International Trust and Investment Corporation, is one of China's largest financial conglomerates.

The investment group for this and future funds will 51% owned by CITIC with the remaining 49% held by a Village Roadshow subsidiary.

According to a statement from Village Roadshow, the funds management business will complement and leverage the advantages of the group's theme park opportunities in the region.

The statement explained "the signing of this important agreement represents a major new business horizon for Village Roadshow.”

Village Roadshow along with CITIC will commit to invest up to 5% in the initial US$500m fund, with CITIC responsible for raising the rest of the investment balance.

Village Roadshow Theme Parks will control at least 60% of the management company responsible for design, construction and operating contracts for the theme parks initiated by the fund.

The company statement added that a potential development had been flagged for the central Chinese tourist city of Chengdu, while confirming previously announced interest in other opportunities in southern China as well as Johor Bahru in Malaysia, and South Korea.

Village Roadshow co-Chief Executive Robert Kirby explained that the contract was "a major milestone in the progression of Village Roadshow’s strategic theme park expansion into China and South East Asia.

"With this major building block in place we are in a position to progress our expansion plans with even greater certainty, control and confidence.”

Village Roadshow has previously agreed to develop and operate a new theme and water park on the Chinese resort island of Hainan.