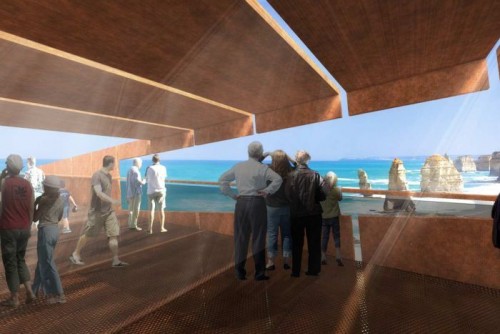 New lookouts will be built at the Twelve Apostles and the Loch Ard blowhole on Victoria's Shipwreck Coast, under a multi-million-dollar Victorian Government plan to boost tourism along one of the world's most spectacular coastlines.

Aiming to create jobs, preserve the environment and support local communities impacted by the 2015 Great Ocean Road Bushfires, $9.8 million is to be spent as the first stage of a $174-million master plan for the region, along a 28-kilometre stretch of coast from Princetown to the Bay of Islands.

The Shipwreck Coast attracts 2.6 million visitors a year but the average tourist stays less than 40 minutes and spends just 18 cents.

The investment is aimed at bridging the widening gap between tourists' expectations and their experience along the most picturesque part of the Great Ocean Road.

The lookouts will be built at the Twelve Apostles and Loch Ard Gorge blowhole, where the viewing platform was closed to the public in 2010 because of coastal erosion, and a pedestrian bridge over Campbell's Creek in Port Campbell.

Telecommunications and Wi-Fi will also be improved, and a Twelve Apostles mobile phone app is likely to be introduced.

Victorian Minister for Energy, Environment and Climate Change, Lily D’Ambrosio said the investment would bring extra tourist dollars and jobs to the region, boosting the economy by $12 million a year, explaining “the Shipwreck Coast is an international tourist destination and this investment will help strengthen the local economy through sustainable tourism. 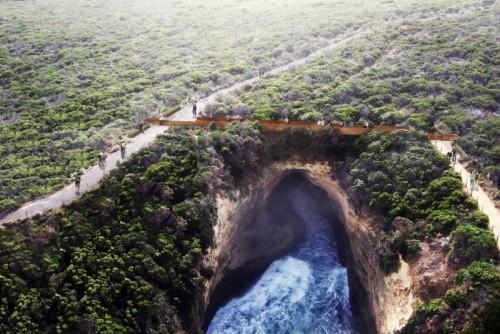 The Shipwreck Coast's limestone cliffs and rock formations are the country's third most visited attraction behind the Sydney Opera House and the Great Barrier Reef.

The master plan was published last year, detailing 58 projects over the next 20 years that could result in a 38% increase in the number of visitors to the region.

Despite expected growth in short-stay trips to the Twelve Apostles and nearby coastal features, the report warns official forecasts for the coast and the wider region show a drop in visitor numbers of around 1% a year.

The report also highlights demand for more high-quality accommodation, with an estimated 328 extra rooms in resorts, hotels, motels and backpacker hostels needed around Shipwreck Coast parks, and an additional 1,774 rooms at the western end of the Great Ocean Road.

The current plan is yet to attract any Federal Government funding or private sector investment.

Images: Designers impression of the proposed new sheltered lookout at the Twelve Apostles (top) and an illustration of the proposed suspended beam at the blowhole on Victoria's Shipwreck Coast (below). Both images courtesy of McGregor Coxall.