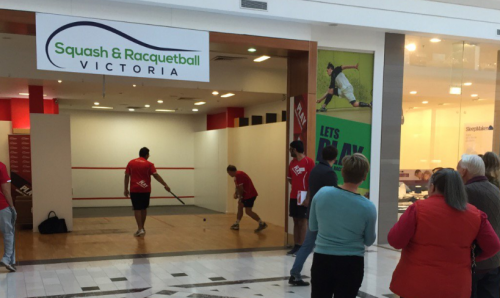 While the full effects of Squash & Racquetball Victoria’s (S&RV) Pop Up Squash concept are yet to be fully felt, the initial response to the initiative has been an extremely positive one according to S&RV Executive Director Fiona Young.

The Australian-first concept, which ran at the Eastland Shopping Centre for three weeks across May and June, saw an empty retail space within the shopping centre transform into a temporary street squash court.

The initiative was funded through VicHealth’s Innovation Challenge grant, and according to Young, achieved many of the concept’s main aims.

Young explained “it was a really successful exercise in terms of exposing the sport.

“Overall, there were just under 3000 people that came through the courts in the three weeks we were at Eastland, and roughly just over half of those people participated in the actual activity and had a go.

“One of the other main reasons people came in to the shop was that they wanted to try some physical activity; there was obviously a curiosity factor as well, but the main reason was people actually wanted to do some activity while they were at the shopping centre, which I guess is really good in terms of VicHealth’s agenda for the activity, because they were around trying to target those people that are not particularly active at present."

While unable to judge the full success of people taking up either squash or racquetball at a local club from just the one Pop Up activation, Young said the initial signs were promising, adding “we had about 13% of those people came back for second and third goes at the sport, so it certainly attracted a lot of interest.

“The majority of people that actually came through and engaged with us – whether that was just talking to us about squash and racquetball or whether it was actually having a go in the shop – a fair few of them knew nothing about the sport, so that was really good we found a target audience that we were aiming for.

“We do know quite a few people have been redeeming the free vouchers that they got in the giveaway packs, and although not a lot of transition to club activities has taken place to date, we still have another activation to complete for the funding requirements."

While the concept proved popular for all ages, Young said the second Pop Up Squash initiative would focus on trying to get younger people involved in the sport.

She concluded “not surprisingly it was the early twenties bracket and below that were the biggest participants and we’ll look at in trying to get our next Pop Up going during a school holiday period.

“The second highest age group was around the fourties and fifties – probably those people that used to play and came over from the historical point of view in that was an activity that they used to be involved with and used to enjoy.

“Hopefully we may attract a few of those back into it.”

The initiative is being funded through VicHealth’s Innovation Challenge grant.

For more information go to www.squashvic.com.au