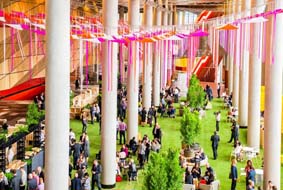 The Victorian Government has finally agreed to an expansion of the Melbourne Convention and Exhibition Centre (MCEC) to keep up with increasing demand for event space.

Having ignored lobbying for funding for an extension in recent State budgets, the Victorian Government has entered negotiations with private contractor Plenary to expand the facility by up to 30%.

Offering up to 10,000 metres2 of additional exhibition space, a new hotel, retail space and car parking, the expansion will be undertaken as a public-private partnership (PPP) with  Plenary, an existing partner with the Victorian Government.

Following record, and near capacity performance in 2013, MCEC which is benefitting from the redevelopment of the former Sydney Convention and Exhibition Centre is currently turning away about 20% of its potential business because of its lack of capacity.

Announcing that the Victorian Government will contribute up to $350 million to the expansion, Victorian Premier Denis Napthine explained “business events generate economic benefits of around $1.2 billion each year to Victoria.

“Collectively, business events provide not only economic benefits but also the constant positioning and profiling of Victoria nationally and internationally. They drive tourism, employment growth, industry development and business linkages.

“The western precinct which incorporates the Melbourne Convention and Exhibition Centre and the surrounding shopping and dining areas is popular with tourists and locals alike, and the expansion will be able to capitalise on this.”

Victorian Tourism Minister Louise Asher said the first key step in the expansion involves developing an appropriate master plan for the precinct to ensure the MCEC remains a world-class facility attracting conventions and exhibitions from around Australia and the world, generating significant economic activity.

Minister Asher stated “these negotiations will allow Plenary an opportunity to put forward an expansion proposal to provide integrated services with an expanded Exhibition Centre.”