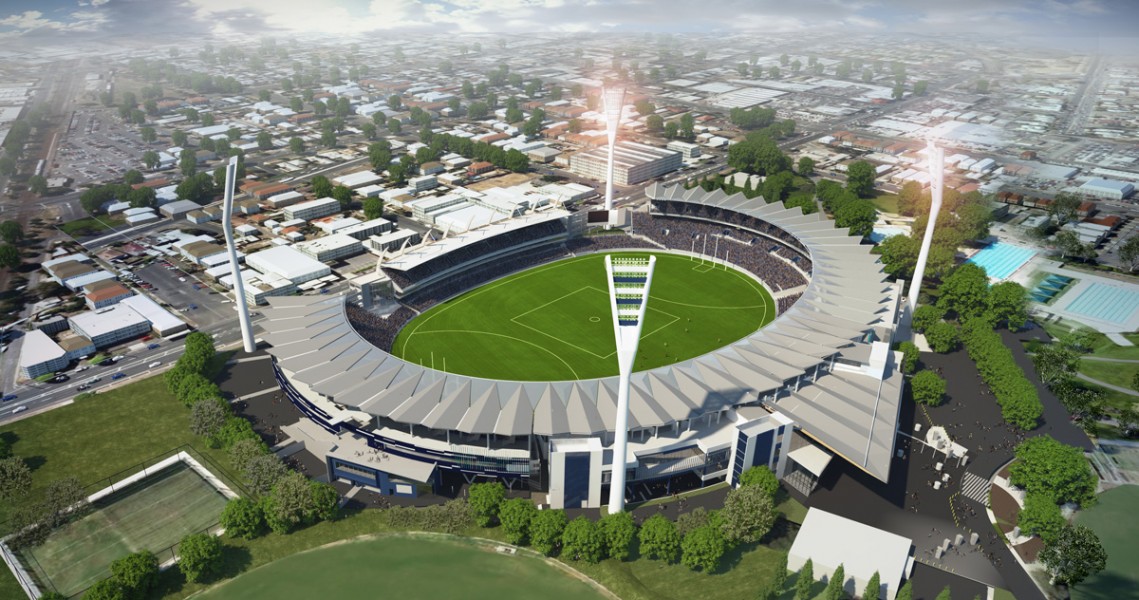 This week’s Victorian budget has confirmed funds to kick-start planning and design for Stage 5 of the redevelopmentof Geelong’s Simonds Stadium.

Aiming to transform Simonds Stadium (Kardinia Park) into the best sporting arena in regional Australia the Victorian budget 2017/18 will invest $3.9 million for the next stage of the redevelopment of Geelong Football Club’s historic home.

The development will see the Stadium’s Ford Stand and Gary Ablett Terrace demolished to make way for a new grandstand which is expected to take the site’s capacity to 40,000 - almost as much as Subiaco or the Gabba.

The redevelopment will see the end of standing at the venue and cap 12 years of development that has transformed the city’s footballing heart into Australia’s leading sports venue outside of a capital city.

The new funding pledge comes as the final touches are being put on the Stadium’s landmark $90 million stage 4 redevelopment which is planned to be unveiled in time for the Geelong Cats to take on reigning AFL Premiers the Western Bulldogs on Friday 19th May.

Along with AFL games, Simonds Stadium has also hosted international cricket for the very first time, along with football, rugby union and rugby league.

Geelong Football Club Chief Executive Brian Cook said he and the club were pleased to hear of the State Government’s commitment, stating “our club is very happy with the State Government decision to fund the design work leading up to the possible construction of the final stage of redevelopment at Simonds Stadium.

“We all look forward to the completion of the stadium.”

The stage 5 planning and design work is expected to begin immediately and take place over the next 12 months, and be completed in time for the Victorian Government to consider it for the 2018/19 budget.

By that time local health insurance company GMHBA will take over as the site’s naming rights sponsor, with Kardinia Park to be known as GMHBA Stadium from 2018.

Close to $200 million has already been spent on upgrading the venue since the stage one redevelopment of the Hickey Stand, which was opened in May 2006.