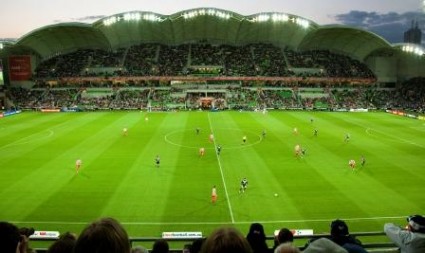 A spokesperson for Victoria Police has apologised for inappropriate 'tweets' made during last night's football match between Melbourne Victory and Glasgow Celtic.

During the friendly game, tweets from Victoria Police provided an online commentary on evictions from AAMI Park. The tweets included:

"Game about to start with one person already evicted from ground. What a waste of ticket money!"
"The score is nil nil at the soccer with only one eviction"
"Score still nil nil. Evictions four"
"Celtics (sic) one.Police five!!!!"
"Game over. Celtics 1 - Police 14"

The FFA's Kyle Patterson told ABC Local Radio it was inappropriate for police to single out the game for attention, stating "last night's football match was the only event to get this attention - there were bigger AFL games played on the weekend which didn't have a similar running commentary.

"I have asked politely for an explanation about that and I've been told that last night's game was considered a major one-off event."

Inspector Mick Beattie from Victoria Police says the tweets should not have been published, stating "I was personally unaware the tweets were going out.

"There was a Victoria Police media officer at the event. It's only this morning, as the person in charge of the operation, that I've become aware of what was going out and I am disappointed."

Melbourne Victory fans have regularly complained over "heavy-handed" police and security actions leading to a fan protest during an A-League fixture against the Gold Coast earlier this year. Supporters claim security staff and police have taken violent action to prevent them holding banners aloft, that authorities have confiscated flags and other merchandise and that fans have been thrown out of games for little reason.

Writing on a fan website, Victory supporter Antony Monteleone suggested that the FFA and Victoria Police "show a massive lack of understanding for the passion and active culture exhibited by active support across the league. The FFA is not used to such behaviour, and the Victoria Police seem to crack down on the slightest and most trivial discretion.

"The clearest example of this was when fliers that had a new chant on them were being circulated through the terrace and Victoria Police confiscated them."

"I have seen police officers assault fans for no good reason as they abuse their rights and responsibilities as protectors of society.

"FFA should embrace such dedication especially when crowd figures are getting lower, not persecuting their supporters. Also, Victoria Police need to stop inciting riots and allow supporters to actually support their team."

In February, Victoria Police released a statement to SBS declaring that it is doing what it can to improve the situation and ensure the safety of all patrons attending football matches in Melbourne.

"Police will not tolerate any unruly and anti-social behaviour by soccer fans.

"At these types of events, there is always the potential for troublemakers to cause problems for the rest of the crowd.

"Where police find any anti-social behaviour, they will act swiftly, remove troublemakers from the venue and issue them with a fine.

"Unruly fans will face ejection and on-the-spot-fines of up to $478 for those caught drunk, disorderly or behaving in an indecent or offensive manner.

"Patrons are also warned that police are taking the issue of flares very seriously and anyone who is found in possession of a flare will face stiff penalties."