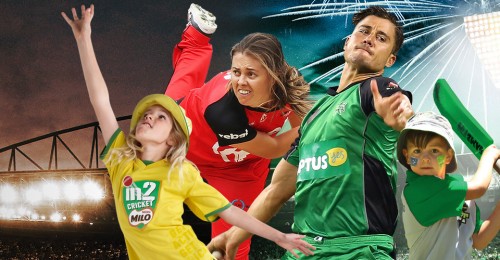 Cricket continues to be one of the most popular sports in Victoria with positive growth at the grassroots level contributing to a record 1,311,184 million participants nationally last year.

Boasting the second highest total participation numbers in Australia, Victoria’s 328,045 cricket participants are spread across all forms of the game and the success of the KFC Big Bash League and Women’s Big Bash League have been driving forces in attracting boys and girls to the game for the first time.

Almost 44% of Victoria’s participants are involved at a club and community level, and this overarching support extends into participants of diverse backgrounds.

Over 123,000 of Victoria’s total participants are from a diverse background, which includes - but is not limited to - those with an intellectual or physical disability, as well as those with multicultural and Indigenous backgrounds.

The release of the 2015/16 Australian Cricket Census coincides with national Play Cricket Week, Australian cricket’s national participation campaign that calls on Australians to sign up to play cricket in 2016/17.

Cricket Victoria Chief Executive Tony Dodemaide said the state continued to be at the forefront of cricket participation across the country, commenting “undoubtedly cricket continues to be one of our favourite sports to be involved in and Cricket Victoria is working particularly hard to ensure people from all backgrounds and abilities can participate and enjoy what our sport has to offer.

O’Neill added “it’s a fantastic time to get involved in cricket with a big summer ahead. Whether you live in the Melbourne metropolitan area or out in regional areas, there are a range of programs on offer in clubs and centres across the state to cater for you.”

Victoria also leads nationally in all abilities participation, establishing the first and only All Abilities Association (Melbourne All Abilities Cricket Association) dedicated to cricketers with disabilities.

The formation of this association, as well as securing hosting rights for the inaugural National Cricket Inclusion Championships in Geelong for the next three years, highlights Victoria’s position as the leading state for not only making cricket one of the most popular sports, but also a sport for all.

Turning to new audiences, Dodemaide said the popularity of the KFC Big Bash League and Women’s Big Bash League has also led to a surge in the number of people engaging with cricket in Victoria for the first time.

He added “there’s no doubt that our teams the Melbourne Stars and Melbourne Renegades have had a real impact on new audiences in this state which has been fantastic to see.

“We’ve got a state-wide focus on strengthening cricket’s junior pathway programs from MILO in2CRICKET through to MILO T20 Blast and junior club participation and involvement in club and community cricket.”

For more information go to www.playcricket.com.au