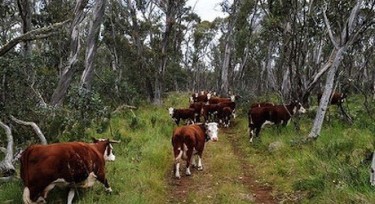 The Victorian Government has delivered on an election pledge to ban cattle forever from Victoria’s Alpine National Park.

With scientific study having shown that cattle grazing is damaging the environment in one of Victoria’s most scenically splendid regions, legislation introduced into the Victorian Parliament last week bans grazing in the Alpine National Park, as well as in the River Red Gum national parks.

Commenting on the legislative change, Victorian Minister for Environment, Lisa Neville stated “our national parks are for people to enjoy, not cows to destroy.

“The science is clear, cattle doesn’t reduce bushfire risk in alpine areas, and they damage the alpine environment.

“By introducing this legislation …, we have ensured that Victoria’s Alpine National Park and the River Red Gum national parks are free of cattle for future generations.”

Alpine National Park is the largest national park in Victoria (over 646,000 hectares) and connects with national parks in New South Wales and the ACT to protect most of the Australian Alps.

It includes many diverse vegetation types, the most significant being alpine and subalpine communities. Snow gums and alpine ash trees heavily forest the mountains. Wildflowers, heathlands, alpine herbfields and snowplains, mossbeds and snowpatch communities grow in the higher exposed areas too harsh for trees to survive.

The new legislation comes 10 years after the first legislation to end cattle grazing in the Alpine National Park.

Cattle grazing in the Alpine National Park was introduced in 2014 by the previous Victorian Coalition Government as part of a three-year trial investigating the role of grazing in mitigating fire risk.

Extensive scientific research has shown that grazing in Victoria’s alpine areas is detrimental to the environment and doesn’t have any value in reducing bushfire risk or fuel loads in alpine areas.