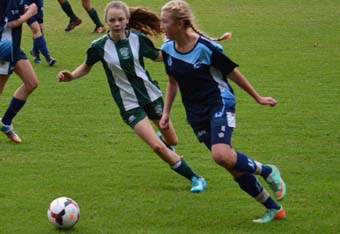 A new funding scheme from VicHealth has been announced to encourage more women and girls across Victoria to get involved in sport.

Changing the Game: Increasing Female Participation in Sport will create new opportunities to increase female participation in sport and raise the profile of women’s sport in Victoria.

VicHealth Chief Executive Jerril Rechter said although Victoria was known as the sporting centre of Australia, evidence shows that not enough women were sufficiently physically active and that participation levels decline as women get older.

Rechter explained “statistics show that four times as many females are choosing to participate in non-organised or more flexible physical activity programs like yoga and swimming compared to organised physical activity.

“Our Changing the Game program is about getting tens of thousands of Victorian women and girls who are inactive or who rarely exercise to get active more regularly through sport – whether it’s through a sports club or in a more informal social way. We know that women are finding it increasingly difficult to get involved in exercise for a variety of reasons – from caring for children to a lack of appropriate facilities for women. This funding is about creating more opportunities that make it easier for them to participate,” Ms Rechter added.

State Sporting bodies across Victoria are encouraged to apply for funding before the 30th October deadline.

Rechter added "(the) funding of $1.2 million will be available over a two year period for successful State Sporting bodies.

"Applications are (now) open ... and we encourage state sporting bodies to think about how they can engage women and girls who don’t normally participate in sports programs that are provided through clubs and competitions.

“This program is about making sure that more Victorians know that women’s sport and participation in physical activity matters. We want to inspire more women – young and old – to get active through sport, throughout their life and see the profile of women’s sport raised in the public sphere. Victorian women are great supporters of sport, and in turn, deserve to be recognised by their communities and the media for their sporting endeavours,” she added.

Click here to view the full guidelines and details for the program.