VenuesWest’s commitment to giving back goes beyond Australia 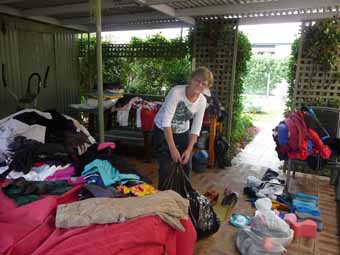 With VenuesWest amassing thousands of lost property items at its venues each year, it looks to donate unclaimed items to communities in need.

In the past, donations have seen items delivered to indigenous communities and this year more than 30 bags of lost property have been collected from HBF Stadium and HBF Arena.

This year VenuesWest has spread its donations further afield, distributing item directly to a community in Kenya, at Loitokitok, a town of 30,000 people located near Mount Kilimanjaro.

The latest donations were sent in June, with VenuesWest’s contribution included in a shipment weighing more than 1500 kilograms.

VenuesWest Chief Executive David Etherton explained “every quarter VenuesWest receives over 1000 pieces of lost property across its community venues HBF Arena and HBF Stadium, with the majority of these remaining unclaimed.”

Some of the lost items include goggles, bathers, jumpers, track suits, t-shirts and shoes. These items are invaluable to a community, where the majority of people simply do not have the means to purchase these items.

Etherton added “giving back to people in need is very important to our organisation and is one way we make every effort to use our resources efficiently.

“I am proud to be associated with an organisation that is focused on giving back to the community by helping both local and international community groups.

As part of this commitment, VenuesWest has recently established the VenuesWest Community Partners Program, which will see VenuesWest joining with a small and specific group of charity organisations offering tailored opportunities and benefits to assist them in achieving their core objectives.

The charities were selected by VenuesWest staff, recognising the valuable contribution these organisations make to the community as well as their affiliation with VenuesWest

As part of this program VenuesWest will provide in-kind donations, venue usage and services to these charities.

VenuesWest is an intrinsic part of the West Australian community providing sporting and entertainment experiences to over 3.5 million community patrons every year.