VenuesWest imposes strict rules on board and staff perks 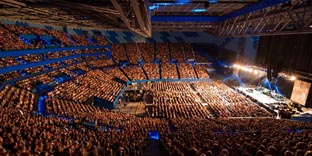 However, PerthNow reports that the two board members who gave away eight tickets to the US pop star’s Perth Arena (pictured) concert to family and friends won’t be asked to resign because the current policy was “ambiguous”.

As revealed by Perth newspaper The Sunday Times, two board members breached policy which states tickets should be used for ‘business purposes’ and board members must accompany their guests.

But he said the offending board members would not be told to step down as the current policy was “ambiguous” and the members had not fully understood it.

Partidge told PerthNow “ I believe they should have understood it (the policy), but I felt that in the big scheme of things the issue of eight tickets doesn’t deserve that they have to resign.”

Partridge said he had completed a report, which recommends a review of policies and procedures “to make sure what occurred cannot occur again”.

That work will be peer reviewed by the Public Sector Commission, which recently uncovered the misuse of tickets at Western Australia’s health promotion agency, Healthway.

VenuesWest’s board has been presented with a new policy covering ticket distribution, with all board members told to sign a declaration that they will comply.