Venues across the world shine blue, white and red to show solidarity with France 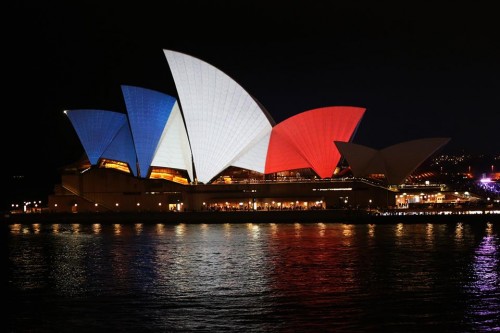 The Sydney Opera House joined significant venues and landmarks around the country, and the world, to light up in the colours blue, white and red as Australians showed their support for the people of France in the wake of the weekend terror attacks in Paris.

Commemorations were also held around the country on the evening of Saturday 14th November in solidarity with the people of Paris after more than 120 people were killed in a coordinated series of terror attacks in the city on the evening of Friday 13th November. Another 200 were injured, 80 seriously.

Other landmarks and venues lit up in the colours of the French Tricolore included Melbourne's Star Observation Wheel, Brisbane’s Story Bridge and the MCG and the spire at the Arts Centre Melbourne  - each showing solidarity with the people of France.

Moves in Australia follow similar actions around the world to support the French.

In New Zealand, the Michael Fowler Centre in Wellington and the Palmerston North clock tower glowed blue, white and red over the weekend.

In the US, the One World Trade Centre in New York and San Francisco City Hall were both lit red, white and blue, while both the Empire State Building in New York and the Las Vegas version of the Eiffel Tower went dark.

17th December 2014 - PUBLIC VENUE RISK AND SAFETY MASTERCLASSES TO BE HELD IN BRISBANE, MELBOURNE AND SYDNEY