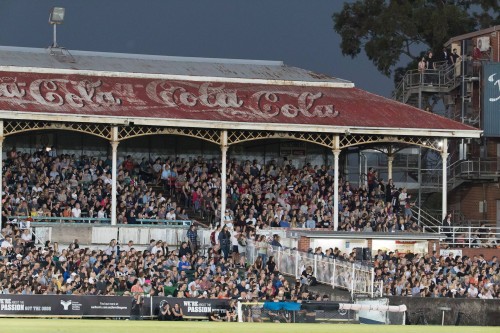 The AFL is set to change venues for its new women's competition after a capacity crowd left fans locked out of Carlton's win over Collingwood on Friday night.

The AFL had been expecting about 12,000 punters to take advantage of free admission, with the game already having been moved from Collingwood's smaller base at Olympic Park.

However, a remarkable 24,500 fans packed out Ikon Park with up to 2,000 fans locked out midway through the first quarter, prompting a public apology from AFL Chief Executive Gillon McLachlan.

Collingwood is scheduled to host another three games at 7,000-capacity Olympic Park during the season, including a clash against Melbourne next Saturday night.

However, AFL Game Development Manager Simon Lethlean says the league will consider shifting that game to Princes Park as part of a double-header after Carlton's clash with Greater Western Sydney.

Lethlean tol the AAP "we don't want to have a game at Olympic Park if it's going to be locking people out and unsafe so we'll have a look at that.

The league could not have scheduled a bigger match to launch the competition, with the Blues and Magpies boasting strong fan bases and a healthy rivalry built over more than a century.

But few had expected to see Carlton's traditional base rocking in a way that resembled its VFL heyday in the 1980s.

Lethlean added "you looked at that game, it was like old-school Princes Park back in the 80s, the crowd that was there,

"It's a pretty phenomenal success for women's sport."