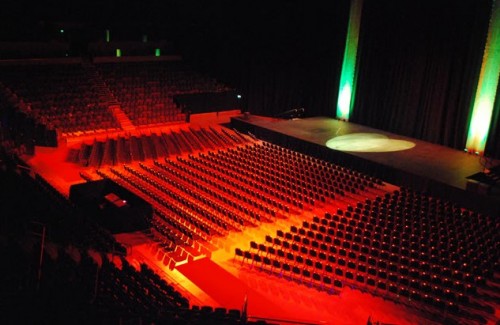 Auckland's Vector Arena is to introduce a new 'intimate' seating format this November.

Dubbed the Vector Arena theatre mode, the 12,000 seat venue will use curtains and stage placement to create an intimate reduced capacity experience, in an attempt to cope with a lack of smaller entertainment venues in Auckland.

The new format will seat anywhere between 1,500 and 3,000 audience members, meaning no matter how many tickets have been sold, patrons will always feel they are in a 'full' venue,

Rather than being a shrunken version of the arena, the theatrel mode moves the stage closer to the seats, resulting in better sound quality and maintaining good sightlines.

Clumps told Fairfax NZ media "the Civic Theatre and ASB Theatre at the Edge have traditionally been the venue of choice for artists looking to play to about 2,000 people. They're well suited to accommodate that size of an audience, and of course,the Civic does it in a beautiful setting.

"But this year, with events such as Mary Poppins coming to The Civic for a seven-week run, it's been hard for overseas promoters to find dates at those two venues that suit their tour schedules."

Clumpas is confident the new format will fill a gap in the Auckland market, adding "we're first and foremost music fans, and we hate the idea that New Zealanders might miss out on seeing truly world-class acts simply because of a lack of suitable venues."

The format will be introduced for country music icon Emmylou Harris, who will play a one-off New Zealand show at the Arena on 18th November.

Prior to the introduction of Vector Arena's theatre mode, for Harris had been unable to secure any New Zealand dates on the back of her Australian tour because she could not find a venue that suited her performance.

For more information go to www.vectorarena.co.nz/