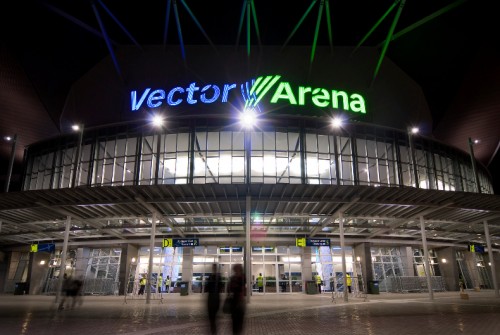 The ranking of Auckland's Vector Arena behind New York's Madison Square Garden is proof that New Zealanders love live entertainment, according to the venue's management.

Vector Arena has been placed 31st in the top 100 Arena Venues worldwide in the just released Pollstar 2013 midyear report - with Vector Arena management also highlighting that the venue ranks ahead of all but one of Australia's major arenas on the list.

"It is proof the Arena is delivering the sort of gigs that the New Zealand public want to go see.

"As the ranking is based on ticket volumes it's also proof just how much Kiwis love to see live entertainment.

"You only have to compare the volume of tickets sold at Madison Square Garden in New York, a total of 194,237, with those at Vector Arena, 191,464, to realise just how much the New Zealand public support and love to see the world's top performing artists.

"(And) New York City alone has twice the population of New Zealand!"

Vector Arena expects to further climb to the top of the list of the world's top 100 Arena Venues with 23 upcoming shows, many of them sold out, for big acts including Rihanna, One Direction, Beyoncé, Fleetwood Mac, Taylor Swift, Justin Bieber and Cirque du Soleil still to come before the end of 2013.

In a statement, Vector Arena management highlight that "this recognition is further proof that New Zealand and Vector Arena is punching above its weight on the world stage by attracting great shows and providing sold out audiences.

"That's no mean feat for a small country at the bottom of the pacific!

"These rankings are important in attracting big acts to New Zealand and along with the positive experiences bands and their crews have at Vector Arena it ensures Kiwis don't miss out on seeing the world's top performing artists.

"Since opening in 2007 Vector Arena has become the venue of choice for the vast majority of big acts touring New Zealand and due to the venue's state of the art set up it's been able to host the full production of the best touring artists in the world, who more often than not used to skip New Zealand on their world tours."

Kansy is quoted as stating that "this venue is better than most in Australia, I think. It's a beautiful, modern facility. We've had a good experience here, absolutely. We like it a lot!"

"This has enabled the Arena to provide state of the art facilities as well as provide a sold out Arena concert experience for acts with smaller audiences, who might otherwise skip New Zealand on their world tour.

"It's this sort of flexibility that ensured Kiwis got to see the Stone Roses, Smashing Pumpkins, Kenny Rodgers, New Order and the Manic Street Preachers to name a few."