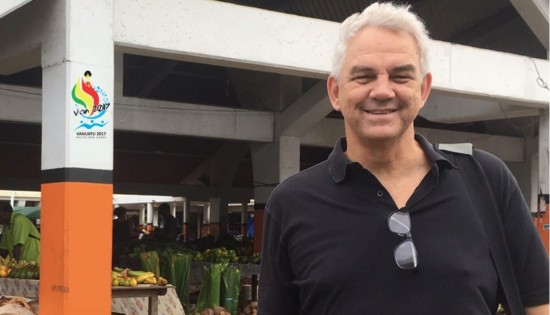 With the 2017 Pacific Mini Games scheduled to be held in Port Vila in December, the Van2017 organising committee in conjunction with the Vanuatu Ministry of Youth Development and Sports (MYDS), the Sports Commission of Vanuatu and VASANOC, have started a process of looking beyond the Games, with a view to ensuring that the venues will be well managed and maintained in the future.

Having consulted to the 2015 Pacific Games in Papua New Guinea, Larry Sengstock, from Otium Planning Group from Melbourne, was in Port Vila for six days to meet with various officials, and talk specifically with the Sports Commission about the process and key elements of a business plan.

Sengstock (pictured above), who has undertaken similar work across the Pacific, emphasised that the first thing to do is to get a clear vision of who are and what the stakeholders want.

In this case the stakeholders also include non-sporting entities who want to have access to the facilities on an ongoing basis for festivals, conventions and other events.

A statement from Van2017 advised that Sengstock had explained “it is very clear that the ability to pay for access for many sporting groups is a major issue. There needs to be rate sheets and policies approved that will ensure a balance between elite athlete use, commercial use, and local grassroots usage.”

MYDA acting Director George Mael Toka indicated that the model that was presented is very realistic and can be achieved if the process starts immediately. He noted it is no good to wait until after the Games to sort out this - it is critical to have the structure of manpower and support in place during the handover stage from the contractors, and in place for the Games.

Then immediately in January 2018, the venues can go into operations mode.

Van2017 Chief Executive Clint Flood was pleased with the outcome of the week indicating that is critical that operating venues are in place for the Games period, but that the real measure of success and importance of hosting the Pacific Mini Games will be seen and felt in the years to come with venues that are fully functional and maintained and being used for all sorts of activities in the community.

Among games venues, Port Vila’s Korman Complex is currently being upgraded under a program by the People’s Republic of China and being built by the China Civil Engineering Construction Corporation.

The facilities are expected to be handed over on 30th October.

The Pacific Mini Games are held from 4th to 15th December in Port Vila.

More details of Procurement, Volunteering, Employment, Sports and Venues can be found at www.van2017.com

17th September 2012 - PACIFIC AND MINI GAMES TO SCALE BACK EVENTS