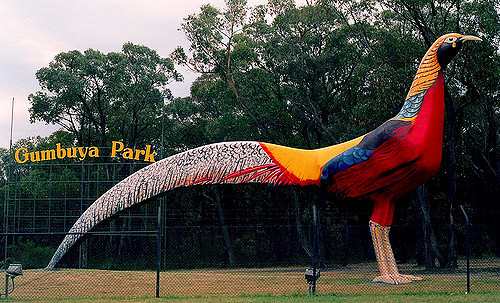 Vandals are believed to have used an explosive device to blow up the famous 25-metre statue of a giant lyrebird outside the Gumbuya Park amusement and nature park.

The explosion caused about $50,000 damage to the large concrete bird, located on the Princes Highway at Tynong, east of Melbourne.

Following the damage, which happened last weekend, a Victoria Police spokeswoman said the vandals were believed to have broken into the Park, stating "once inside, it's believed the bandits used some sort of explosive device to blow up the 25 metre statue, causing extensive damage to its rear end.

"The offenders then fled the scene leaving behind approximately $50,000 of damage."

The Arson Squad attended the attraction and have been attempting to determine the cause of the explosion.

Originally a pheasant farm, Gumbuya Park was converted into a visitor attraction park in 1978.

It features a toboggan slide, water slides, paddle boats and mini cars, as well as native wildlife including, kangaroos, wallabies and birds. The giant lyrebird became a local icon having featured in television advertisements for the park in the 1980s and 90s.

Police have urged anyone with information about the explosion to contact Crime Stoppers on 1800 333 000.

Image: The giant lyrebird prior to recent vandalism.