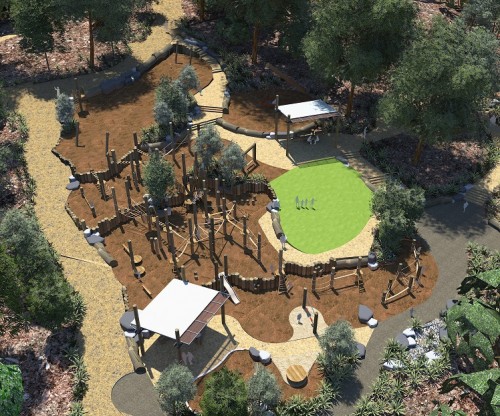 The Valley Reserve playspace in Mount Waverley has been named Victoria’s best new major playspace (in the above $500,000 category) in awards presented by Parks and Leisure Australia's Victorian branch.

The playspace will now be a contender against other state winners in the national Parks and Leisure Australia awards in October.

The Valley Reserve playspace was singled out for its originality and innovation and for the use of the SPARC (Socially inclusive, Playful, Active, Relevant and Connected) principles in its creation.

City of Monash Mayor Geoff Lake said the local community should be proud of its award-winning playspace, given many local children and families had contributed ideas which were incorporated into the design.

Mayor Lake advised "the Valley Reserve playspace was developed with a high level of creativity so that people of all ages can enjoy this unique space.

“It’s an adventure playground with rope climbing courses and flying foxes but children and families also love how natural elements, like logs and a dry creek course, are included.

“The playspace has been enormously popular since it opened last September, which we’re thrilled about.

"Local families told us they wanted Monash to have a major playspace of regional significance and, thanks to everyone’s efforts, we now have one.”

Stage 2 of the Valley Reserve playspace project is underway, with an educational hub and nature play pods being created for schools and nature groups.

The playspace was funded by the City of Monash and designed by Playce.