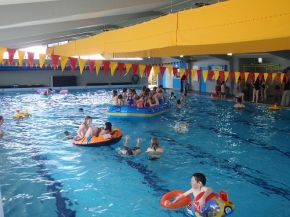 The Wanaka Community Pool is expected to reopen in the coming months after the Queenstown Lakes District Council agreed to spend about $115,000 strengthening the building as a temporary fix.

Following a briefing from staff and professional advisers, Mayor Vanessa van Uden announced this week that funds already in the Wanaka pool budget would be channelled into the urgent repair work.

The Otago Daily Times reported that the pool was closed on Friday 18th July after an independent engineering investigation found the building only met 20% of the new building standard, making it officially 'earthquake prone'.

Mayor van Uden said told the Otago Daily Times that the Council would make an immediate start on designing the strengthening measures, obtaining the necessary building consents and then carrying out the physical work as a matter of urgency.

Mayor van Uden stated "we'll be working as hard as we can to make it happen as quickly as we possibly can."

In the meantime, the Council would continue to subsidise Wanaka swimmers' use of the Cromwell pool for the same price as they would pay in Wanaka, after it negotiated an arrangement with the Central Otago District Council.

Their pool concession cards would also be valid in Cromwell and at Alpine Aqualand in Frankton.

Mayor van Uden said the council was acutely aware many people relied on access to the Wanaka pool to learn to swim, as a training facility and for recreation and therapy.

She added "this is a temporary solution while we work out the best long-term option for providing pool facilities in Wanaka."

Work on strenghtening the pool is expected to take up to two months before the facility can be reopened.