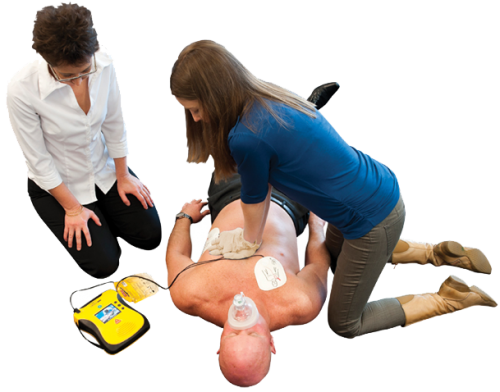 With the mission statement of ‘no more deaths from cardiac arrest,’ not-for-profit Urban Lifesavers will bring the beat back to raising cardiac arrest awareness with a mass defibrillation training event at Melbourne’s Federation Square.

Coinciding with cardiac arrest awareness month in October, the Back in a Heart Beat event will take place on Wednesday 12th October to encourage everyday people to take responsibility to be an urban lifesaver by becoming better informed, more confident and willing to take action to save another person’s life.

Author of novel Back in a Heart Beat and founder of Urban Lifesavers Anne Holland said the event will raise awareness of the importance of bystanders applying automated external defibrillators (AEDs) to prevent avoidable deaths caused by sudden cardiac arrest.

Holland (pictured below) explains “with cardiac arrest striking 33,000 Australians each year, it is the leading cause of death in the country and kills more Australians than all cancers and road tolls combined.

“However, cardiac arrest is reversible if there is immediate action. The optimal window to save someone is to defibrillate them within three to five minutes of cardiac arrest. For every minute of delay, survival decreases by 10%. If bystanders perform early CPR and early defibrillation before the arrival of emergency medical services, survival rates can dramatically improve.”

Holland’s passion for educating ordinary people to become urban lifesavers stems from the sudden cardiac arrest death of her husband Paul in 2008, who left behind five children.

She added “without early defibrillation, less than 5% of sudden cardiac arrest victims survive compared with an 80% chance of survival if an AED is applied by bystanders before paramedics arrive.

“This event will educate participants about the common myth that AEDs can be used the wrong way, shock the wrong person or will kill someone who is in cardiac arrest, when in actual fact the AED only works if it detects a life threatening heart rhythm.” 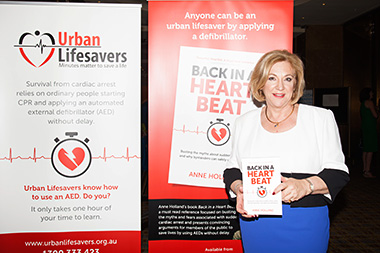 Holland also believes more needs to be done to introduce AEDs in the Australian community and workplace, with a national rollout of AEDs and education required to implement a successful public access defibrillation program.

According to Holland “public access defibrillation programs have proven to be successful overseas in countries like the United States, where King County in Seattle experienced a 62% survival rate increase compared to just 13% when no education programs existed

“In Australia it is now mandatory for someone trained in first aid to be competent in the application of an AED, however it is not compulsory for it to be provided in a first aid kit, therefore preventing that staff member from performing this lifesaving skill should there be a sudden cardiac arrest in the workplace.

“With sudden cardiac arrest 559 times more likely to occur than a fire related fatality, we want to make AEDs as commonplace as fire extinguishers and a key inclusion in first aid kits.”

Back in a Heart Beat will take place at Federation Square on Wednesday 12th October at 12.30pm. Registrations will open in late August.

Founded by Anne Holland in 2015, Urban Lifesavers is a not-for-profit organisation established to raise awareness and deliver education programs to empower ordinary people, with or without first aid training, to become Urban Lifesavers and give a victim of cardiac arrest a second chance of life by applying an Automated External Defibrillator (AED). Minutes matter in a sudden cardiac arrest and early CPR with defibrillation is the key to saving lives.