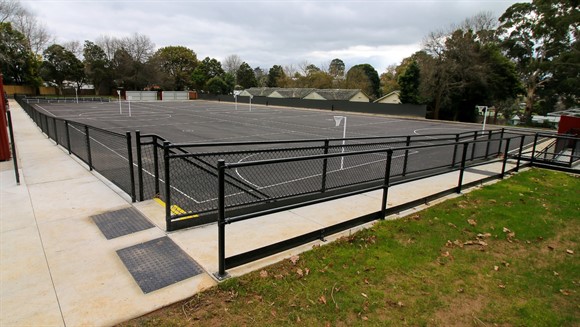 The Drouin Recreation Reserve now boasts six courts that comply with Netball Victoria’s facility design guidelines. Each court is now fitted with height adjustable goal posts, which allow for maximum flexibility when it comes to scheduling junior and senior competitions, programs and clinics.

The $652,000 project was made possible after a successful application to Sport and Recreation Victoria’s 2018/19 Community Sports Infrastructure Fund, with the remaining $52,000 coming from Council’s 2019/20 capital works program.

The project focussed on courts three to six at the Drouin Recreation Reserve, home to the Drouin and District Netball Association and Drouin Hawks Netball Club, who run competitions all year round. 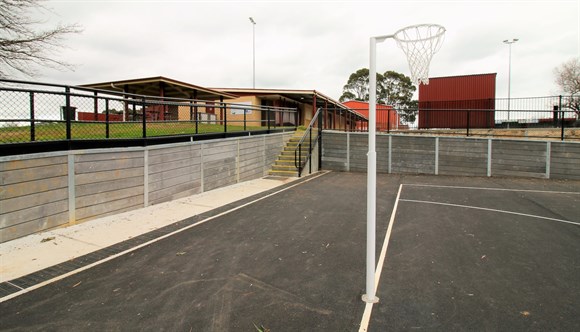 Council was able to future proof the site by including court lighting into the design phase of the four-court upgrade. Delivery of the project included structurally engineered footings and electrical supply conduits to the positions designated for future lighting towers.

The improved drainage network will ensure the site holds up to the unpredictable Gippsland weather, while the addition of improved walkways and shelters have created new vantage points for spectators.

The courts will be put to good use in the upcoming twilight netball season. Council is working with Sport and Recreation Victoria and both clubs to plan for an official opening once COVID-19 restrictions have eased and sporting activities resume.

Member for Eastern Victoria, Harriet Shing notes “these upgrades have made a massive difference to the quality and safety of the courts and will provide ongoing benefits to players and umpires for years to come. Investments like these also encourage more people to get involved in netball, which is great for competition, and it’s a brilliant result following years of advocacy to secure the funding.

“We’re grateful for Sport and Recreation Victoria’s funding contribution, which has helped Council to deliver this upgrade to a highly used community facility. These upgrades will provide a tremendous boost to participation and provide Baw Baw with a high-quality venue for not only the local competitions, but for schools and the wider community to use as well.”

West Ward Councillor Jessica O’Donnell adds “this is a significant facility upgrade that will benefit both players and spectators. Thanks to the funding provided by Sport and Recreation Victoria, Council has been able to deliver this upgrade sooner and ensure that our sporting infrastructure can support our rapidly growing community.”

Images: Four netball courts have been extensively upgraded the Drouin Recreation Reserve thanks to funding from Sport and Recreation Victoria and Baw Baw Shire Council.