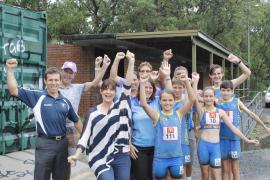 New amenities costing more than $800,000 at McEvoy Oval at Umina on the NSW Central Coast have been officially opened.

Jointly funded by Federal, State and local governments, with small contributions being made by local sporting groups, the improvements have seen the provision of a new clubroom, canteen, storage rooms, and male and female amenities along with a new irrigation system to encourage stronger turf establishment and growth.

Used by over 1500 sporting participants per year, as well as local schools for carnivals and gala days, the sportsground is home to Woy Woy Little Athletics, the Peninsula Touch Association and the Southern Spirit Cricket Club.

Commenting on the new facility, NSW Minister for Sport Stuart Ayres said the joint investment would increase accessibility to the main athletics centre in the area and ensure it can cater for more teams and players from interstate, advising “local sport is the lifeblood of the Central Coast and this major investment has also provided an economic boost for the region.”

Central Coast Council Administrator Ian Reynolds said the amenities upgrade was a boost to local sporting clubs, adding “the field experiences high usage rates throughout the year (so the) new irrigation system (will see) faster rehabilitation of the playing surface, allowing greater useability of the oval.”