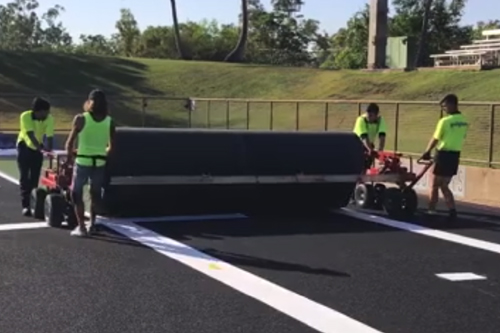 A $1.1 million program of upgrades to Darwin’s Marrara Hockey Stadium is underway in preparation for the Darwin International Hockey Open in September.

Work will see the replacement of the venue’s the hockey pitch and the shock pad, elevating the stadium to a world-class hockey venue and lighting upgrades on Pitch One, to allow for televised broadcast and livestreaming.

Set to be completed by the end of August, the Hockey Open event will see world number one Australian Kookaburras will be taking on Rio Olympics gold medallists Argentina (world ranking two), Malaysia (12) and Japan (16) between 18th and 22nd September.

Looking forward to the event, Hockey NT Executive Officer Ian Harkness said he expected to see huge crowds turnout for the Kookaburras game against Argentina, commenting “as far as top quality sport goes, I can’t remember in my lifetime - a world number one and world number two playing in any sport in Darwin,” he said.

“So this is a great opportunity not just for people who follow hockey, but sports loving people to come along and watch top quality sport.

“Malaysia actually beat Argentina earlier in the year, so to think this might be a lay down between Australia and Argentina for the final on 22nd September - I’m not so sure.”

With the $16.7m Darwin International Tennis Centre having been opened at the weekend, Northern Territory Minister for Tourism and Culture Lauren Moss said the top quality matches were an incredible opportunity for the Territory’s sports and tourism industries.

"This investment in sporting infrastructure ensures we keep attracting international level games to the NT.”