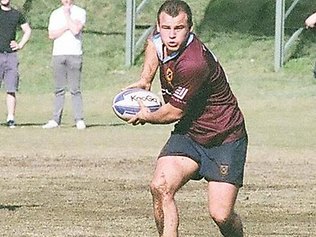 A young rugby union player has had his life support switched off two days after being injured in a freak on-field accident in Brisbane.

Halley Appleby, 21, was rushed to the intensive care unit of Royal Brisbane Hospital on Saturday with a spinal fracture and brain injury after a freak accident in a club match.

The University player was pronounced brain dead on Sunday afternoon after suffering a brain haemorrhage during a premier grade match in the suburb of Ashgrove on Saturday afternoon.

Queensland Police on Monday morning confirmed that Appleby's life support had been switched off.

Appleby had been resuscitated on the field after he stopped breathing following a tackle while playing for the University of Queensland.

The action of doctors in the crowd and the quick response of medical staff gave the former St Joseph's at Nudgee student attention until ambulance officers arrived at the ground.

The match was called off with players and fans visibly upset at the traumatic scene as treatment to keep Appleby alive was enacted behind hastily erected screens on the field. Ambulance officers attended to heart problems that followed the initial injuries.

Coach Mick Zaicek said Appelby had been on the field as a substitute in a premier grade game for only five minutes when the accident happened, stating "it was quite innocuous, it was a strong tackle but nothing illegal.

"It was one of those tragic things where he never got up."

Premier Bligh stated "for a young man with such a bright future to lose his life in this way is heartbreaking. I offer my condolences to his family and friends."

Minister Reeves said the death was a terrible loss, adding "this is such a tragedy for a player so young and I offer my heartfelt condolences to his family and those who shared his love for rugby and his sportsmanship."

The University club, flood-hit in January, posted on its website a message "to thank all clubs and individuals for the on-going messages of support for Halley and the Appleby family."